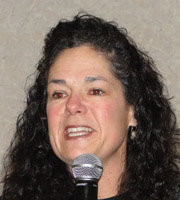 Our Speaker, Erin McCallum of Enterprise WA spoke of promoting legislators with a positive business outlook. Christine Rose asked us to attend the 2012 retreat. Nirel Marofsky is our student of the month from Sammamish.  Steve Lingebrink spoke about the success of the Polio Plus Program. Another $50M contributed by the Gates Foundation.

Erin admitted to depending on technology over intuition in locating Glendale Country Club this morning and gave a $5 contribution for showing up late as a result.

Erin stated that politics in Washington State influence our daily lives far more than politics on a national level. 41% of the population in WA identify themselves as independent voters which she feels is a very good thing because people vote on the issues and the individuals, and not down party lines.

Enterprise Washington is a membership organization with over 300 members statewide. They engage in nonpartisan candidate recruitment and training to ensure that our state leadership is business focused. She strongly encouraged people to step up and consider public service by running for political office. Enterprise Washington’s PAC supports business-focused candidates and has had success in getting 11 people elected. Nine of them are Republicans and two are Democrats.

Erin noted that our state has a $1.5 billion budget deficit caused by deep-seated, long-term problems. Enterprise Washington has done focus groups that show that voters are tremendously frustrated by the partisanship and short-term priorities of the state.  They want the state to enact a sustainable long-term budget, protect and prioritize funding for k-12 education, enact reforms that reduce the costs of state services, and keep transportation priorities intact.

The focus group further showed that voters believe that:

In 2010 we had the greatest turnover of state legislators in the last 15 years. Erin believes that we will have at least that level of turnover again in 2012. Erin said 2012 will be an anti-incumbent year because people are so frustrated.

Enterprise Washington scores legislative districts from 0 to 100 to show the propensity of voters in each district to elect more business and economic-focused legislators. The results show that voters want more leaders who focus on this issue.

Organized labor has an extremely focused approach to getting their strategic goals accomplished. They give generously to safe incumbents (those who won their last election with 60% or more of the votes.)

Enterprise Washington works with employers to help them understand how to talk with their employees about business issues facing our state and the impact those issues have on their company and employees. The goal is to ensure that employees understand the importance of having a pro-business stance in our state.

Erin happily accepted our gift of Food for NorthWest Harvest.

Scott Sadler gave the Invocation: He quoted Dr. Martin Luther King saying….“Life’s most persistent and urgent question is: ‘What are you doing for others?'”

Dr. King also said….”Whatever affects one directly, affects all indirectly. I can never be what I ought to be until you are what you ought to be. This is the interrelated structure of reality.”

The message from these quotes is not only one of service but one of caring.  It is not just the physical act of service but the spirit behind the service that gives people hope and that will cause them one day to complete the cycle of caring in service to another.

Christine Rose encouraged everyone to attend the retreat and provided those who had already signed up with a generous and meaningful gift for their early responsiveness to the need. The reward? A lovely box of Jello.

52 people have registered for the Pinot Noir party at the Callan home.

Nirel Marofsky:  Nirel came to Sammamish two years ago from Florida. Her father and mother, Steven and Carol and her two sisters joined us for breakfast.  Nirel has a positive outlook on life, a love of learning, and is a good speaker.  Nirel volunteers with the Link Program at Sammamish to welcome students on their first day of school. She was Vice President of the Environmental Warriors Club and helped rebuild a salmon hatchery. She was one of the leaders of the Diversity Dialogue and set the tone for cultural awareness at Sammamish. She would like to study psychology and philosophy in college.

Wendi Fischer promoted the Bellevue 10K with materials on the table for all members to get busy supporting the run. Theme for the teams this year will be movie titles. Each team’s were designated by Wendi and each team is responsible for recruiting 200 runners and bringing in $5000 for the run. Wendi read every single solitary member name and instructed folks to line up around the room to select a movie title.  Some very creative names were selected.

Steve Lingenbrink attended the international assembly where 530 district governors gathered for training. The Gates Foundation announced that Rotary has ended the $200,000,000 challenge early and because of that the Gates Foundation is adding another $50,000,000 to the cause of Polio eradication. Steve will become the District Governor for district 5030.

The following links lead to updates on the PolioPlus program:

Our web flunky, Robin Stark has stepped down as editor of the Reveille and Jim Kindsvater has graciously stepped in to serve in that capacity. A Web Based Training Session was held on Monday, January 30th at 5:00 PM for all Reveille scribes and our new editor to ensure that we all know (more or less) what we’re doing.  We appreciate your patience in this transition.

President John Martinka announced a board-approved approach to the perennial election season problem of impartiality. The decision is that if we are approached by a candidate who wants to speak to the club, we will offer the same courtesy to his or her opponent. If that person declines, we will still allow the available candidate to speak.

Erin McCallum is the President of Enterprise Washington. Erin has spent the last 23 years raising more than $160 million for community organizations and is a leader in non-profit fundraising. Enterprise Washington is committed to economic prosperity for all Washingtonians. Erin is an active volunteer and member of the Seattle Four Rotary Club. She and her husband live in North Bend with their three children.