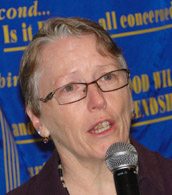 Sallie Neillie of Project Access Northwest spoke of efforts to match individuals with special needs and without health insurance to medical providers.  Dick Swanson’s Silver Chords sang.  Larry May is Rotarian of the Month.  John Schweiger was inducted into the club.

Sallie Neillie of Project Access Northwest gave a presentation on the efforts being made to match those individuals with needs for medical specialty services with medical specialists.

Sallie pointed out that those individuals with no health insurance make up only 16 percent of the population, but pay 30 to 50 percent more than insured individuals for care, which is often at an emergency room, not in the offices of a primary care physician or specialist. To make matters worse, many of the uninsured end up being in collection trouble for the inability to pay medical bills.

Given this backdrop, Sallie described the primary care system available to the uninsured in King and Snohomish Counties as adequate through federally qualified health centers. However, Project Access identified a problem when many of the patients utilizing primary care through clinics did not or could not find quality specialty care.

As a result, the organization has found its niche in matching specialists with patients who

have needs that match the discipline of specialists. As a result, the organization has been able to offer care to 4500 patients a year utilizing the talents of some 1000 clinicians. Because the patient community is well screened and matched to doctors, patients no-show only five percent of the time, compared to 30 percent of the time for general population patients. That fact saves doctors from wasted time and increases efficiency in the medical delivery system.

Partnerships are in place with a number of groups including Overlake, Evergreen and Group Health, as well as Northwest Gastroenterology and internal medicine specialists. Project Access is able to offer translators in Spanish as well as 38 other languages.

The meeting was called to order by President John Martinka.

Visiting Rotarians were Stan Miner and Sallie Neille, both of Seattle International.

Good news was conveyed about Maryanne (the orange juice lady at Glendale). Jennie Andrews told the club that Maryanne had a health scare that has been alleviated. We are thankful for that news.

Dick told the club about the group’s singing telegrams, available for Valentine’s Day.

STUDENT OF THE MONTH

Larry May introduced February student of the month, Casey Bishop, a junior at Eastside Prep. Casey was joined by her parents and the Dean of Students at Eastside. Casey discussed her love of music and athletics (flute and volleyball, respectively. She also discussed her involvement with the Chron’s and Colitis Foundation, a cause for which she has logged many volunteer hours.

ROTARIAN OF THE MONTH

Larry May was honored as the Rotarian of the Month for January for his work with the student of the month program.

Jim Gordon brought John Schweiger to the front of the room for the purpose of being inducted. John was welcomed as the newest Rotarian in the world and greeted with the club’s traditional standing ovation.

SERGEANT AT ARMS AND SPARKLE QUEEN

Wendi Fischer led the club in a graduate level seminar on the Super Bowl and Groundhog Day, complete with dates and fun facts.

Nearly every member of the club had to part with $2 after missing something on Wendi’s quiz.

Katherine De Stephano gave an update on the 10K, about two months away.

We are doing well in terms of sponsorships, although there are still plenty of opportunities to be filled.

“Be careful when reading health books; you might die of a misprint.” Mark Twain