"Edgar's Induction into the National Baseball Hall of Fame" 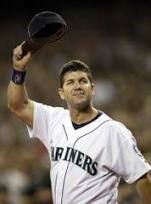 Bob Holert introduced our well known speaker Kevin Mather, President & CEO of the Seattle Mariners. He spoke eloquently about Edgar Martinez’s incredible career, what he meant to the Mariners, what he meant to baseball in Seattle, baseball “politics” surrounding a player making it into the hall of fame, and Edgar’s induction into the Baseball Hall of Fame in Cooperstown, NY. Cooperstown is a small town right out of Norman Rockwell in upstate New York with a windy two-lane road in and out and most facilities are owned by one lady. If you want to have an event associated with the annual induction, for practical purposes you had to book it a year in advance. The Mariner’s did so and about 5000 Mariner fans showed up to celebrate and witness Edgar’s induction! They greatly outnumbered Yankee and other east coast fans. Quite a tribute to Edgar and the Mariners!

Kevin left time for questions and he got several both related to Edgar and the baseball hall of fame. He also was quizzed on as this years “step back” season and the upgraded talent at various levels of Mariner farm teams. The good news is the Seattle Mariners now have the 11th best minor league talent in baseball. New quality talent is on the way and hope springs eternal. Go Mariners!

Past Pres. Jenny thanked Kevin Mather, handing him a card which represented both the “Thank you” and also 1200 lbs. of Rotary First Harvest fresh food donated by member sponsor Jeff Cashman of Cashman Pension Consulting.  Kevin stayed after the meeting to continue the discussion and answer questions.

Jenny closed the meeting with her Thought for the Day from long time MLB General Manager Commissioner Pat Gillick. “Baseball is about talent, hard work, and strategy. But at the deepest level, it’s about love, integrity and respect.”

Past President Jenny Andrews opened the Bellevue Breakfast Rotary Club (BBRC) July 26, 2019 meeting, followed by Rich Martin’s inspirational thought “Life is a storm, my friends. You will bask in the sunlight one moment and be shattered on the rocks the next. What makes you a Rotarian is what you do when that storm comes. You must look into that storm as you do and shout, “Do your worst, for sure I will do mine!” And the fates will know you as we know you, Bellevue Breakfast Rotarians.” Rich took the liberty of adapting the quote from Alexander Dumas, the brilliant French writer. He wrote this as part of his classic the Count of Monte Cristo 1844. It was followed by the flag salute. Kit Bowerman introduced guests.

Margie Burnett outlined the history of the 12-year BBRC / Foster Children and Families Adoption Party/Family Fest. She saw a Rotary Adoption presentation at the International Convention in Los Angles and promoted it to BBRC with the help of Madeline Gauthier and Chuck Kimbrough. It is one of the most memorable and emotionally rewarding annual BBRC projects enjoyed by BBRC members. As a part of Margie’s presentation, a recent video of one of the adoption parties created by Laura Cosacchi was shown!

Tanya  Franzen-Garrett announced that this year’s adoption party will be at Woodridge Elementary School on Oct 5th. She described the need for drivers and asked members to sign-up on line or contact Girish Bhatia.

David Bolson, reminded us that this is Rotary International  literacy month. With his dry humor, he played the role of Mr. Rogers from children’s TV fame, while singing and reading from a child’s book. There will be a Books for the World packing event Aug 3 & 4 at Northwest Harvest Warehouse with morning and afternoon shifts. The children’s books will be shipped overseas to areas of greatest need.

Wendi Fischer, playing the role of Sergeant of Arms, introduced the club to word cards. The Rotarian members by tables had to provide the meaning for the word on each card. There were few successes and many dollars were put on the tables!

Laura Cosacchi ran a short video tribute to Past President Jenny Andrews. Last was an announcement by Steve Szirmai of a fellowship event with wine tasting and a bike ride. After much ribbing he emphasized tasting versus imbibing.

Kevin Mather was promoted to President & Chief Executive Officer of the Seattle Mariners on Nov. 9, 2017. He had served as the Mariners President and Chief Operating Officer since Feb. 1, 2014. The Mariners Executive Vice Presidents and Sr. Vice Presidents report to Mather and form the senior leadership team for the organization.

Kevin has participated on a variety of Major League Baseball committees over the years. His committee appointments currently include Revenue Sharing Definitions Committee and the Audit Committee. During his career with the Mariners, Mather has served or worked closely with executives on Long-Term Strategic Planning, Finance, Investments and Insurance Committees.

Prior to the Mariners, Mather worked for the Minnesota Twins from 1989-1996 where he served as Director and then Vice President of Finance. Before his career in baseball, Mather was with the Certified Public Accounting firm of Deloitte, Haskins & Sells for four years, and The Pohlad Companies of Minneapolis for one year.

Mather grew up listening to Bob Uecker as a Milwaukee Brewers fan in Madison, Wisconsin. He is a 1984 graduate of the University of Wisconsin where he received his B.A. degree in accounting and risk/insurance. He is on the Executive Board of Junior Achievement of Washington. His hobbies include his family, golf and his two dogs.

He and his wife Shannon live in Issaquah and have three grown sons: J.P., David and Steven and two dogs, Dutch and Augustus.