“Dreaming About Travel During Covid-19!” 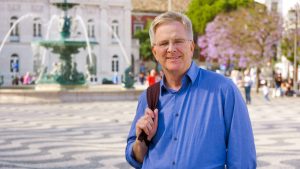 Rick Steves will join us this morning to discuss his travel business Rick Steves’ Europe, located in Edmonds, Washington. Many of us have watched Rick for years on Public Broadcasting and his philanthropic efforts to fund public television. And others in Bellevue Breakfast Rotary have taken Rick Steves’ European tours in the past. There will also be ample time for questions so if you, like many of us, cannot wait to travel again, this is a meeting you do not want to miss. Here is your chance to hone in on your next European vacation!

Please note: the picture shown is Rick at Rossio Square in Lisbon, Portugal.

Rick Steves is a popular public television host, a best-selling guidebook author, and an outspoken activist who encourages Americans to broaden their perspectives through travel. But above all else, Rick considers himself a teacher. He taught his first travel class at his college campus in the mid-1970s — and now, more than 40 years later, he still measures his success not by dollars earned, but by trips impacted.

Rick is the founder and owner of Rick Steves' Europe, a travel business with a tour program that brings more than 30,000 people to Europe annually. Each year, the company contributes to a portfolio of climate-smart nonprofits, essentially paying a self-imposed carbon tax. He also works closely with several advocacy groups and has been instrumental in the legalization of marijuana in states across the US.

Rick spends about four months a year in Europe, researching guidebooks, fine-tuning his tour program, filming his TV show, and making new discoveries for travelers. To recharge, he plays piano, relaxes at his family cabin in the Cascade mountains, and spends time with his son Andy and daughter Jackie. He lives and works in his hometown of Edmonds, Washington, where his office window overlooks his old junior high school.