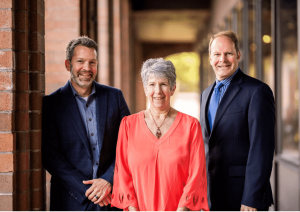 Steve Greenbaum joins us today to discuss the history of the business of which he is President, Greenbaum Home Furnishings. Started by Steve’s father Ken in 1959 on Bellevue Way, Steve will share the company’s milestones since they opened their doors 61+ years ago. He will also talk about his family as today the business is owned and run by Steve, his sister Cindy Lindner and his brother Jon. This discussion will include how the three siblings came together to work for their father, their father’s decision to retire and the changes that have occurred since his retirement in 2005. Last Steve will share their commitment and involvement with the community!

Steve was born in Seattle at Swedish hospital in 1959, 3 months after his father opened the business. He has lived in Bellevue his entire life, except for 6 months in 1977-78 when he attended Whittier College in LA. He transferred to the UW in fall 1978, joined a fraternity Alpha Sigma Phi and graduated in 1982 with a degree in economics.
Steve started working full time at Greenbaum Home Furnishings in 1978 after leaving Whittier and is still there 42 years later! He worked his way up at Greenbaum’s from: stock assistant; delivery and warehouseman; warehouse manager; head of IT (1983) with the responsibility for installing and implementing a furniture retailing system; and became Vice President in 1984, managing all computer systems, operations, facilities management and Accounting functions. Steve has served as President and CFO since 2005.
Giving back to the community, Steve served for 10 years on the board for Olive Crest, a local non-profit, working with abused kids and also chaired their Golf Tournament for 13 years. Steve is a single father of 4. His oldest, whom he adopted, lives in Florida with her husband and his 3 grandchildren. His other 3 kids are 28 26 and 24. The 28-year-old lives in Phoenix after graduating from ASU and works in HR. The 26-year-old started work at Greenbaum’s this year as an administrative assistant. The youngest graduated this month from WSU in human development and is getting ready to start his career.
Steve coached Little League baseball, youth soccer (both boys and girls) and youth basketball. After all his kids grew past his ability to coach, he decided to try playing baseball in the local Puget Sound Senior Baseball League (over 55 division). It is one of the largest in the nation with over 70 teams and 1000 players.