"Benefits of Boxing for Parkinson’s Patients" 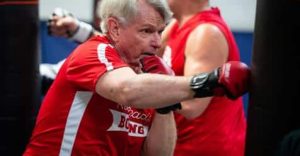 Recently a good friend of mine was diagnosed with Parkinson’s disease. I also have another friend in California who was diagnosed 5 years ago with this disease and has been boxing for a number of years, which for her has significantly limited its progression. Recognizing many others likely have friends with this health challenge, I am excited that Michal Sellars can join us to discuss both the research he has done on the benefits of boxing as a therapy for Parkinson’s and the non-profit he has started- “Boxer’s with Parkinson’s” (BwP). Included will be BwP’s strategy for long-term financial self-sufficiency.

Mike Sellars is a 6-Year Rotarian from Kent and a Paul Harris Fellow. Mike was diagnosed with Parkinson’s in 2017. Seeking solutions, Mike discovered that the exercise from boxing slows down the impact of the disease. He became a "Rock Steady Boxing for Parkinson’s" affiliate, opening 5 programs in King, Pierce and Thurston Counties. He also created an app to manage boxer assessments and collect data for research. In October 2019, he established the nonprofit, Boxers with Parkinson’s.