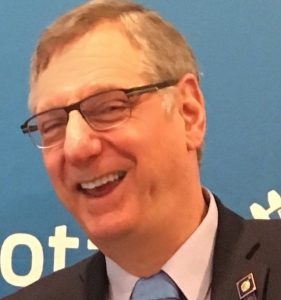 DG Alan Merry will join us to discuss the 2018-19 Rotary year during his annual visit to BBRC!

Holiday Party, Rotary Club of Lake Forest Park, WA (Lake Forest Park), 2007. That’s when Alan Merry became President-Elect for the 2009-2010 Rotary Year. It only took an hour to exhaust the list of LFP members who hadn’t held the top post before, and Alan became the unanimous victim (choice).

His Presidential Year didn’t get off to the best start. While attending PETS, Merry was trying to move the mattress from his bed at the Doubletree Hotel, and courtesy of an exposed staple, he ended up with a one-inch slice running down his right index finger. In between thoughts that the bleeding would never stop, Alan kept muttering the Rotary Theme that year, and dearly hoped that he hadn’t ruined this amazing organization. What else could he think when they kept telling him that “The Future of Rotary is in Your Hands?”

Alan is a Health Care Data Analyst for Kaiser Permanente Washington, a local Health Care Organization serving the state of Washington and portions of Idaho and Oregon. His forte is in creating Work Management Systems, and complex step-saving macros.

An avid baseball junkie, Merry perennially hopes that this will be the year for the Seattle Mariners. As a graduate of the University of Washington, Alan is also a devotee of all things “Husky.”
———————-
The Factual Bio
1. Joined Rotary in 2000
2. Health care data analyst
3. In our District Leadership, he’s been Assistant Governor, District Stewardship Chair & District Trainer
4. Is about to retire from Kaiser Permanente as a Data Analyst
5. Received his Club’s Rotarian of the Year Award
6. Past President Of Lake Forest Park Rotary Club
7. Major donor to The Rotary Foundation
——-
Sample of 3 Presidential Accomplishments
1 We actually started to understand what the difference between the local Rotary Club of Lake Forest Park Foundation, and the Rotary International Foundation was.
2 Diplomatically convinced one of our long-term Board Members that it was time to turn the reins over to someone else. He’s still a member!
3 Handed out recognition certificates to nearly every member of the club at my Changing of the Guard celebration! It showed that club members all had some leadership opportunities during the year.

Quotes About Rotary...& More
• “I want to grow up to be remembered as a Rotarian.”
• “The first thing I turn to is the Four Way Test.”
• “I love Rotary Math!”
• “If we want to make permanent change in our world, we must contribute to the Rotary Foundation.”
• “Computer geeks can go days/weeks/months without seeing another human being. Rotary is my happy place.”