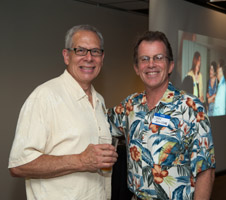 The BBRC House Band started the evening with a going-away serenade to Sayoko Kuwahara, our erstwhile club administrator with a rousing rendition of “Club Administrator” to the Beatles

Sayoko assured the club that Spider Monkey and the Fairy Godmother would be back from time to time, even though she was leaving the club administrator post.

The House Band then broke into “Johnny Martinka” to the tune of Lady Madonna, complete with a rousing club accompaniment of kazoos.

Wendi Fisher, the mistress of ceremonies for the event, introduced Doug Cameron for the invocation and pledge.

Mr. Josiah ended his remarks with a remarkable rendition of “I Believe,” which he described as his passion for service above self in Rotary.

President John came to the mike to discuss his Rotary year, which he said was a challenge, but rewarding.  During the year, the club restructured and changed the structure of our

foundation.  John called up and recognized each of his board members.

Chris Monger, in a rare move, presented his incoming board with a gift of earplugs.  Chris described the earplugs as useful for those times his prodding might become too loud.  President Chris encouraged everyone to attend his first meeting as president on July 6 where nothing could possibly go wrong.

In addition to the giving of gifts to the board, Cordell Josiah presented gifts to John, Chris and District Governor-elect, Steve Lingenbrink.  He said the gifts were in recognition of all our club has done, and will continue to do, in Antigua.

Paul Chapman was next on stage with the presentation of flowers to Pam Monger and Jan Martinka.

The Rotary President pin was then passed to Chris from John with the admonition that Chris not lose the pin.

John then recognized the Rotarian of the Year, Steve Lingenbrink, who gave countless hours of time at Rotary functions over the last year in addition to the years of dedicated service to the club and RI.

The evening concluded with the House Band’s rousing rendition of “Clang Clang Monger” to the tune of Bang, Bang Maxwell Silver Hammer.  The presentation included vintage pictures of Pam Monger.

The finale by the House Band, Paul Harris and the Fellows was “Wendi,” a sendup of The Association’s Windy, in tribute to our sparkle queen.