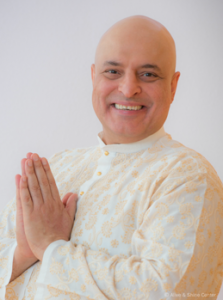 According to a 2016 Yoga Journal report, 36.7 million people practice yoga in the America and the yoga market is worth $16 billion dollars in the US and $80 billion globally.  Join Aadil Palkhivala, world-renowned yoga master to understand why yoga has appealed to so many Americans in the last decade.  Learn the difference between fitness and yoga and the lifelong benefits of having an authentic Purna Yoga practice. He will share his personal story about how he was born because of yoga and started learning yoga at the age of 7. He has taught hundreds of thousands of people around the world. His teachings include companies such as Microsoft and Hewlett Packard, Cirque De Soleil (Mystère), Kareem Abdul Jabbar, movie stars and Olympic athletes.

Aadil Is one of the world's foremost yoga Masters. In fact, he is credited with bringing alignment based yoga to the West in 1980. Additionally, he has degrees in physics, mathematics, law and is a Shiatsu and Swedish bodywork therapist, a Clinical Hynotherapist and an Ayurvedic health practitioner. He has lectured at dozens of Fortune 500 companies and traveled over 3,000,000 miles teaching and educating around the world. That, by the way, is more than 150 times around the earth!