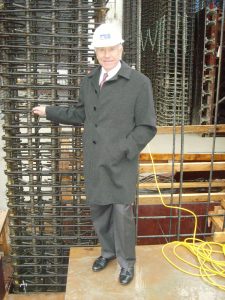 BBRC members Katherine De Stephano and Cary Kopzcynski were the program talking about their companies and how they were impacted and overcame the recent economic downturn. “Weathering Economic Storms” – Two stories.

Katherine owns Escape Outdoors that started in 2000 and has multiple locations.  Because of some foresight and adept maneuvering, they came out okay.  Staycations became popular and they were able to tap into that.  She pointed out that you have to be ready as the storm will come.

Cary’s story was much different.  Cary owns Cary Kopzcynski & Company (CKC structural engineers) and he started by asking who knew what a structural engineer does.   Half the room raised their hand.  He promptly challenged the response saying that most who think they do actually do not.  Yours truly was guilty as charged.  Cary’s company designs the spines of buildings.  That part that holds it up.  He had many examples of current and former projects.  He was hit because commercial building stopped due to both lack of demand and financing.  His story was one of downsizing, making hard personnel decisions and outsourcing.  While he is back to where he was before the crisis, his business has forever changed.  He is a poised to be a lot more nimble when the next storm comes.

Katherine De Stephano is the Founder and Owner of Escape Outdoors.

Cary Kopczynski is Senior Principal and CEO of Cary Kopczynski & Company (CKC), a structural engineering firm with offices in Bellevue, San Francisco, and Chicago. For over 25 years, CKC has provided design services for major urban buildings throughout the United States and beyond. The firm has won over 50 regional and national awards, and has twice been selected by national trade associations as a top structural engineering firm to work for nationwide.

CKC has designed over 20 notable building structures in downtown Bellevue, including Lincoln Square Expansion, a 2.6 million square foot mixed-use development currently under construction at NE 4th and Bellevue Way; The Bank of America Building and The Hyatt Regency Hotel at Bellevue Place; and The Spring District Apartments, which is located at the new 36-acre urban development on the site of the former Safeway distribution center.