Angela Murray will join us to discuss The Sophia Way’s mission and programs to help end homelessness for adult women by providing a path to stable, independent living.

Anne Frank on the cover of Life Magazine

Just a FYI . . . The Holocaust Center for Humanity will be featuring an exhibit – LET ME BE MYSELF: THE LIFE STORY OF ANNE FRANK.  (March – May 2018).  See Link for details.  This exhibit is world renowned and is making limited stops in the United States.

Dee Simon, Executive Director of the Center was our guest speaker on January 26th. 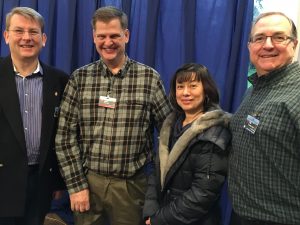 Please welcome John Hall, who has been a prior member of Rotary, for five years in Palm Springs, before stepping away to focus on his business.  We are thrilled to see John back in Rotary and looking to become active with us in Bellevue.   While  in Palm Springs, John was actively involved in the Palm Springs American Youth Soccer Organization (AYSO) and served in many leadership roles including Commissioner, Fund-Raising Director, Coach and International Exchange Director. In his spare time he also volunteered with Guide Dogs of the Desert!

We look forward to John’s engagement with our club, where we will welcome his energy and passion for our initiatives. We particularly like John’s enthusiasm for getting his hands dirty by doing work that will help advance our mission in the community.

Congratulations to Tom Leonidas who was recognized as Rotarian of the Month for January.  This was to highlight his work in helping BBRC secure funding support for the Issaquah Food and Clothing Bank’s truck, where the project grant totals $39,500.  This project is a collaboration between the BBRC, Issaquah, Sammamish and District 5030; thanks to Tom’s efforts we were able to secure a $12,000 district match for the project.

This is tremendous for our club and the community, especially with the collaboration across our Rotary family in magnifying the amount of funds we were able to secure for this project.  It also talks to the success of the M3 Vision, as we will be able to tell our story in successfully supporting our local community through Rotary action.  Well done to Tom on his contributions, as well as the others in the Community and Vocational committee for making this project come to life. 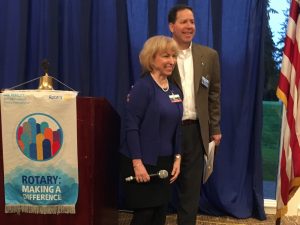 BBRC was very honored to have Dee Simon, Arik Cohen and Ingrid Steppic from the Holocaust Center for Humanity with us today.  The program was organized in advance of Holocaust Remembrance Day – Saturday, January 27th.

Dee is the Executive Director and spoke about the Center’s mission to inspire students of all ages to confront bigotry and indifference, promote human dignity and take action.  The Center provides educational materials, curriculum and interaction with Holocaust survivors – who tell their stories to 20,000 students annually.  The Center provides teaching trucks (loaded with books, artifacts, videos and other resource materials) that are provided free to schools throughout the Pacific NW and Alaska.

Ingrid Kanis Steppic was a child in Holland during the Holocaust. Ingrid’s parents, Jan and Nel Kanis and their family hid Jews from the Nazis and were instrumental in disrupting the Nazis’ plans throughout Holland.  In 1971, Ingrid’s parents were recognized by Yad Vashem (The World Holocaust Remembrance Center) as “The Righteous”.  {link to Kanis Family Story} 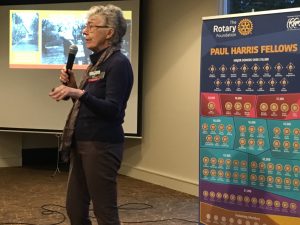 Ingrid Kanis Steppic was a child in Holland during the Holocaust.

The Righteous, honored by Yad Vashem, are non-Jews who took great risks to save Jews during the Holocaust. Rescue took many forms and the Righteous came from many different nations, religions and walks of life. What they had in common was that they protected their Jewish neighbors at a time when hostility and indifference prevailed.  The Righteous and their family members could have been killed for sheltering Jews.

In a world of total moral collapse there was a small minority who mustered extraordinary courage to uphold human values. These were – “The Righteous”. They stand in stark contrast to the mainstream of indifference and hostility that prevailed during the Holocaust. Contrary to the general trend, these rescuers regarded the Jews as fellow human beings.

“It’s a wonder I haven’t abandoned all my ideals, they seem so absurd and impractical. Yet I cling to them because I still believe, in spite of everything, that people are truly good at heart.” — Anne Frank 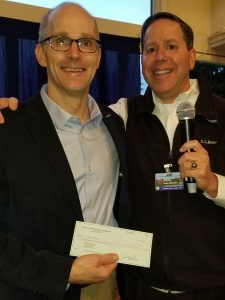 This past Friday BBRC donated $6,751 to Rotary First Harvest in honor of Michel Carter’s many contributions.  David Bobanick was our guest speaker this past Friday and received the donation.

David’s presentation highlighted some of the numbers associated with RFH.  Most impressive is the 200,000,000 pounds of healthy fruits and vegetables distributed to food banks since 1982.  This accomplishment is even more impressive as nearly half the food grown in the US goes to waste.  David’s presentation also included a short slide show highlighting Michel.  {Link to Slide Show}

The donation to RFH was a direct result of BBRC members donating to the 2017 annual Turkey Drive which enabled the Community Service Committee to purchase 60 frozen turkeys.  The turkeys were delivered to Hopelink, Issaquah Food and Clothing Bank and the Snoqualmie Valley Food Bank.  We had a surplus of funds and the amount above is what was donated to RFH.