"The US Navy Today" 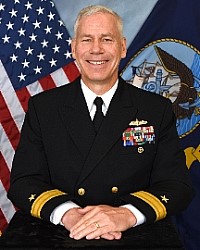 Rear Admiral Pyle will speak on our Navy’s enduring mission, today’s threats and challenges, the carrier strike group composition, and how this applies in a regional context.  He will speak for about 20 minutes, reserving time for questions from attendees.

Rear Adm. Fred Pyle is a native of McAlisterville, Pennsylvania. He is a 1990 graduate of the Pennsylvania State University.

Ashore, he attended the Naval Post Graduate School and the Industrial College of the Armed Forces. He served in the Office of Budget on the Secretary of the Navy staff as a budget analyst, United States Joint Forces Command as flag secretary, the Surface Warfare Directorate on the Navy staff as the budget branch head and as executive assistant to the deputy chief of naval operations for integration of capabilities and resources. As a Flag Officer, he served as Deputy Director of Plans, Policy and Strategy (J5/8) at the US European Command in Stuttgart Germany.