"The Soccer Career of Kasey Keller"

Kasey Keller gave us a fascinating presentation on his globetrotting career as a soccer player.   As a young man, Kasey was very athletic and played many sports so his father couldn’t understand why he was giving up all other sports to play soccer when there was no professional soccer league in the United States at the time.  Kasey wasn’t particularly concerned because he was intending to play in England, a rather ambitious goal.   It was a big deal when he became the first American to play 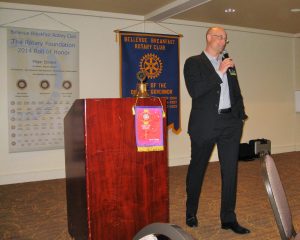 in England on a US passport in 1992 after a very long and arduous process to get a work permit.

Of all the 92 professional soccer teams in England, Kasey played for Millwall, located in a very rough area in Southeast London.  His coach at the University of Portland told him that “they kill people there.”   According to Kasey, there were not only 18 years kids engaging in hooliganism but 18 year old kids with their fathers.  Kasey played 202 games for Millwall, which included four championship seasons.

For the next three years, Kasey played for Leicester City, where he established himself as a premier soccer player.

After Spain, Kasey had to make a decision about whether to go back to London or go to Istanbul.  When he arrived in Istanbul, there were 150 photographers and 60 TV cameras waiting for him and it was a big ego trip for him.  At the end of the day in Istanbul, he announced he was going back to London, where he played for Tottenham.

In 2005, Kasey went to Germany and joined Borussia Mönchengladbach, where he played for 2 1/2 seasons and prepared for the 2006 World Cup.  While in Germany, Kasey lived in a small castle.  In 2007, he returned to London to play for Fulham but injured his arm and was out for four months.   His wife particularly liked this stint in London because the owner of the team, Mohamed al-Fayed, was also the owner of Harrods and Kasey’s family received a 33% discount when they shopped there.

After years of living abroad, Kasey returned to the United States where his kids could attend the same school for more than a year.  He signed with the Seattle Sounders and played with them for three years until he retired in 2011.  He has successfully  transformed himself from a player to a broadcaster and his kids recently graduated from Mercer Island High School.

Wendi Fischer called the meeting to order at 7:30am.

Colleen Turner introduced Kara Cox, the Club’s short-term international exchange student who will be leaving for France on June 24.  Kara is 16 years old and is completing her sophomore year at Newport High School.   During her exchange, she will be stayin

g at the home of her host sister, Caroline Lebeslourd, in Entrammes, a village about three hours from Paris.  Kara likes the idea of immersing herself in an unfamiliar culture and absorbing everything.   She is currently learning basic French.  Kara will be returning home on July 22 with Caroline, who will be staying with Kara and her family until August 24.

Colleen Turner spoke about the Club’s need to find a host family for our next inbound international exchange student, Léonard, a 16-year old young man from a small town outside of Lyon, France who will be attending Sammamish High School during the 2015-16 academic year.

The host family provides food, lodging, a warm family life, and treats the exchange student as they would their own children. They encourage the student to learn and adopt most of the ways of their household and to get involved in the community and teach the student about our culture and learn about theirs.

Colleen urged Club members to serious consider hosting. Our members who have been host families have found it to be an enriching experience.   If you can’t host, encourage someone you know who might consider it.   Host families do not have to be Rotarians.  Although it’s ideal for them to have teenage children, it’s not a requirement.

Our fun-loving Sergeant-at-Arms, Tim Leahy, called up one person from each table to give us their best

rendition of the Charleston in anticipation of Rotating the Wheels to be held at the Maplewood Golf Course on Saturday evening, June 27.  The theme is the Roaring 20’s, affectionately known as Wendi’s Speakeasy.   It was a stitch to watch Ann Norman, Neil Bretvick, Paul Osborn, Ruben Ladlad, John Cherry, Ron Healey, Traci Tenhulzen, Paul Cunningham, Adam Mihlstin and Alex Hopkins kick up their heels.

2. Scott Sadler is looking for a donation of 10 trail/mountain banks for low-income teens to use on an upcoming trip.

Congratulations!
Today is your day.
You’re off to Great Places!
You’re off and away!

You have brains in your head.
You have feet in your shoes.
You can steer yourself
any direction you choose.
You’re on your own. And you know what you know.
And YOU are the guy who’ll decide where to go.

You’ll look up and down streets. Look ’em over with care.
About some you will say, “I don’t choose to go there.”
With your head full of brains and your shoes full of feet,
you’re too smart to go down any not-so-good street.

And you may not find any
you’ll want to go down.
In that case, of course,
you’ll head straight out of town.

It’s opener there
in the wide open air.

Out there things can happen
and frequently do
to people as brainy
and footsy as you.

Kasey will share his early start on an egg farm in Olympia, Washington, through a 25 year career as a top performing goalkeeper, to his current job as a radio and TV commentator. He played college soccer at University of Portland, then signed with the English team Millwall in 1992. His long career included playing for Leicester City, Tottenham Hotspurs and Fulham, also in England, Rayo Vallecano in Spain, and Monchengladbach in Germany. Kasey “retired” in 2008 to return to the northwest with his wife and two kids so they could settle down; but an offer from the newly formed MLS expansion team, the Seattle Sounders, brought him back to the game for another three years.
After officially retiring, Kasey began working as a color commentator for the Sounders as well as ESPN. Kasey has received numerous accolades, as part of various teams and individually, for his accomplishments as a goalkeeper. Now that he isn’t under contract to “avoid acts of danger”, Kasey enjoys four-wheeling, hunting, snowboarding and waterskiing