"The Role of Police in a Diverse Community" 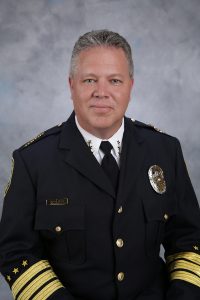 Rotarian Of The Month

Congratulations to Carmela Ramaglia, she is the special Rotarian Of The Month!  We so much appreciate all you do Carmela as chair of the Fellowship Committee,  your enthusiasm each week and cheer squad!

Chief Steve Mylett was sworn in as Bellevue’s Chief of Police in April 2015 after an extensive national search. Chief Mylett joined the Bellevue Police Department from Texas, where he led the Southlake Police Department from 2011 until early 2015, following 23 years with the Corpus Christi Police Department. During Chief Mylett’s tenure at Southlake, property crimes decreased by 30 percent.
At Corpus Christi, Chief Mylett rose through the ranks, from cadet to assistant chief. He served in various divisions and assignments, including the Patrol, Special Services (Narcotics), Community Services, and Administration Divisions. Before joining the Corpus Christi force, Chief Mylett served in the Air Force as a security police officer for six years.
Chief Mylett earned a bachelor’s degree in applied arts and sciences from Midwestern State University and a Master of Science degree in criminal justice leadership and management from Sam Houston State University. He is also a graduate of professional development courses including senior management in policing (Police Executive Forum) and Bill Blackwood Leadership Command College.