"The Power of Positive" 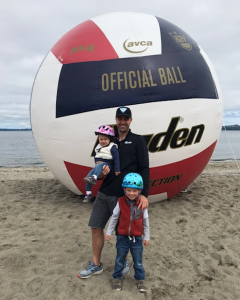 Our speaker was Jake Licht, COO and VP Brands, Baden Sports discussing “The Power of Positive” and how Baden Sports has grown their market and brand over the years. Jake grew up in Yakima, graduated from Western Washington University and worked at Boeing for 12 years. How did he end up in a completely different professional track? He married the daughter of the owner of Baden Sports and obviously impressed him!

Baden Sports was founded at a location near Longacres in 1979, starting as a youth sports company after the owner felt the sports products he purchased for his kids were not high quality and he could do better! In 1993 they moved their location to Federal Way and then moved to their present location in Renton in 2013.

In the 90s, Baden Sports thrived on innovation and diversification. They invented cushion control technology for basketballs. They were able to have their products sold by Walmart, Fred Meyer, Target, Dick’s Sporting Goods and Sports Authority, all large national retail chains.

Today they are focusing on vertical integration and diversification. Dick’s Sporting Goods created their own balls under the DSG label and became la smaller customer. Baden in turn focused more on direct to consumer through their website and found by personalization (adding a name to the ball), it helped them sell a lot of balls! They also bought a factory from a Korean company in the Dominican Republic. There they not only make volleyballs but have also shifted production from suppliers in China for other products. Baden also developed the Axe Bat, which is a unique bat design modeled after Ted Williams habit of using an axe to perfect his swing. This product is presently being used by MLB players like Dustin Pedroia and Mookie Betts of the Boston Red Sox and George Springer of the Houston Astros and others.

Today Baden Sports is run along three divisions – Garmy Sports (the factory), Baden and the Axe Bat and all 3 take advantage of shared services (HR, Accounting and Finance, IT, etc.) provided. The opportunities continue to be available for future success as are the challenges to take advantage of those opportunities. Jake shared each of those with us. And he also shared that they develop and sell a lot of games other than balls – volleyball and badminton sets, croquet sets, tether ball sets, bocce ball sets, horse shoes sets and bean bag toss games. Check them out at www.badensports.com.

At the end of the Presentation, “Glory Days” President for September Chris Monger. let Jake know 1000 lbs. of fresh produce was donated to Rotary First Harvest (a donation by Pratt Legacy Advisors) in appreciation of his presentation! Thanks Jake for joining us!

Jake Licht is Baden Sports’ Chief Operating Officer and Vice President of Baden Brand. He oversees daily operations for the company’s Baden Sports and Axe Bat divisions and is responsible for team, product and brand strategy for the Baden Brand.
Baden Sports, a family owned and operated company, was formed over 35 years ago to build the highest quality sporting goods in the world. In 1984, Baden created the first women’s basketball and its patented Cushion Control Technology changed the way all high-end basketballs have been made for the past 20 years. Baden’s full product lineup now includes balls for every sport, backyard games, ball carts, and accessories.
The company’s newest innovation, the Axe Bat, introduced in 2011, gives hitters the first and only bat designed to support the biomechanics of their swing and to reduce the risk of hand/nerve injuries commonly associated with the swing. The Axe Bat is gaining rapid acceptance at all levels, including in Major League Baseball, where All-Star Mookie Betts of the Boston Red Sox, and Carlos Correa, the reigning American League Rookie of the Year with the Houston Astros, are among more than a twenty players swinging it regularly.
Licht first joined Baden Sports in 2014, as VP of Operations, focused on building a winning team and creating best practices in product development, product management and global Supply Chain management. He has overseen Baden’s growth in manufacturing through their factory in the Dominican Republic.
Licht was promoted to Chief Operating Officer and VP of Baden Brand in September 2016.
Licht graduated from Western Washington University with degrees in Management Information Systems and East Asian Studies and earned his Masters in Software Development Management from Carnegie Mellon University.
Jake and his wife, Annie-Rose, and son Will, reside in Normandy Park, WA.