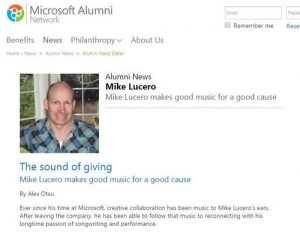 Mike Lucero, VP of Connected TV Strategy and Product for Radio, shares his passion to re-invest the entertainment business and advocacy for the struggling musicians, through his work with MusiCares. With the many ways people can now listen to the music they love, Mike breaks down the changes from an artist’s perspective. Club news includes an update on the upcoming Dine Around, Rotary Day discussion, Katherine DeStephano shares her Rotary story and a boost for the BBRC 10k “All in for Autism” with some Price is Right fun.

Kaj Pedersen introduced our guest speaker, Mike Lucero, to share some insight on the current state of music industry. Previously with Microsoft Xbox team, Mike has been spending time developing and recording the “Friends of Mike Collective” album and reconnecting with friends/artist including Posies, Heart and Hey Marseilles. An artist’s ability to monetize their music is becoming more difficult with music outlets such as YouTube, Pandora, Facebook, and Spotify. However access to music through Amazon and Itunes provide more financial benefit to the artist and Vinyl is also a small bright spot. Mike shared that the easy part is finding great artists and musicians, along with writing and collaborating great material. The hard part is doing something with it, determining the right marketing, PR and distribution.

Mike also shared some stories on how the non-profit, MusiCares, has helped many artists that struggle and depend on the art for income.

Carmela Ramaglia and Sheldon Sweeney reminded the Club to sign up for the upcoming Dine Around. We have eight generous hosts for the event. Once a list of participants is available, everyone will be contacted with the name of their host. Don’t forget to sign up or you’ll miss this great chance for fellowship and a wonderful dinner with friends!

February 23rd is “Rotary Day”. Created 110 years ago, each club is to designate one day of the year to devote to something recognizes Rotary and creates community. Wendi lead a brainstorming exercise to come up with ideas for the BBRC “Rotary Day”. The club came up with lots of great ideas including serving ice cream at the Crossroads Spray Park. The final “Rotary Day” event will be announced soon!

Katherine DeStephano shared her story in why she joined Rotary and why she continues her service through Rotary after six years. The energy of the BBRC members along with involvement in the Bellevue 5K is what captured Katherine, and the synergies, fellowship and impact on the community is what continues to keep Katherine as an active and valued member of the Bellevue Breakfast Rotary Club.

“All in for Autism”

The Price is Right

Bob Barker (aka Paul Chapman) and Price is Right announcer, Johnny, (aka Tim Leahy) was joined by contestant, Megan Sweeters, for a lively game of “All in for Autism”. Megan won prizes from Outdoor Escapes by correctly guessing the current number of runners registered for this year’s Bellevue 10K of 36, and the number of runners needed by the April event of 3006.

Madeline Gauthier announced that we are looking for applicants for the upcoming Ryla Event.

After leading ground breaking initiatives at Microsoft including the launch of Xbox Live and playing a key role in the program that brought content such as Hulu, MTV, ESPN, Twitch TV, Crackle and Red Bull TV to the Xbox, long time Kirkland resident Mike Lucero is launching into a new phase of creative influence with the development of the “Friends of Mike Collective”. The FM Collective is currently developing an album project led by Lucero that was released in the fall of 2014. The record was released officially at two shows, Friday, September 5th 2014 at Columbia City Theater and Saturday September 6th 2014 at Kirkland Performance Center.
Lucero recently stated, ”I am excited to record some of the music I’ve been working on for the past few years and to reconnect with the artists who I’ve become friends with over the years on various projects including the Posies, Hey Marseilles, Heart, Fences, Cataldo, Crème Tangerine, Gabriel Mintz, Zach Lombardo, Michael Kroll, Peter Benjamin and others. We’ve recorded over a dozen songs to date and were excited to release the album in September. A portion of the proceeds for the CD and tickets for the release shows go to support MusiCares, an organization that has provided emergency support for music people in our community.”
One of Lucero’s key collaborators has been Ken Stringfellow, the front man for the legendary band, the Posies. Lucero and Stringfellow met through a mutual friend and co-wrote a song together. Since Stringfellow resides in Paris, the entire collaboration was done through Skype and exchanging files via email and Dropbox, beginning with Lucero recording some demos on his cell phone and the two bouncing ideas back and forth across the Atlantic. Stringfellow and Lucero will be featuring the song at the two shows, along with tracks from Stringfellow’s most recent album, “Danzig on the Moonlight.” Says Stringfellow, “It’s been a terrific experience connecting with some of Seattle’s finest indie musicians and creating and performing some great music, all for a cause that gives back in a way that has a true impact on the local music scene. “
Lucero’s decision to channel the proceeds from the shows and the album sales to MusiCares was an easy one. “The one thing I’ve learned is that it’s really tough to be a working musician in this town or any town. MusiCares is a safety net for artists and music people that are both highly successful or barely scraping by. Given the communal nature of the FM Collective project, this felt like the right way to give back to the local music community and perhaps even turn it into a franchise that continues to raise and channel funds to MusiCares year in and year out.”