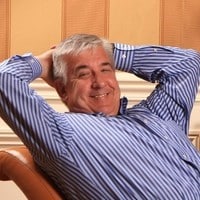 Fran Dougherty will discuss the impact of 5G and why it matters. 5G is the fifth generation of wireless technology. It offers fibre-like speeds and throughput, lower latency and massive connectivity.

The European Commission has said 5G will be one of the most critical building blocks of our digital economy and society in the next decade. Worldwide revenues by 2025 are estimated to be $225 billion!

Fran Dougherty is currently driving the ecosystem development for Microsoft’s Azure for Operators
business, partnering with operators, software vendors, systems integrators, and
enterprise customers.
Previously he was the CTO for Microsoft’s Automotive Industry, part of Microsoft’s WW
commercial business where he worked across product teams, sales, partners, and
customers to guide Microsoft’s strategy for the automotive business.
Fran led a team in Azure Engineering working closely with Microsoft’s largest and most
strategic customers and partners to architect their services to be available on Microsoft
Azure. He was the worldwide lead for engineering investments and was also one of the
primary visionaries for Microsoft’s Cloud Solutions Architect role.
He was the CTO for Worldwide Incubation Sales where he led the technical specialists
for Microsoft’s Enterprise Incubation Businesses focusing on then emerging Azure
business.
Fran has a long history of delivering products in Microsoft. He led the program
management team for Mobile Services, delivering Microsoft’s Mobile Messenger and
Mobile Hotmail, and VOIP services to millions of customers and creating new integrated
services for the launch of Windows Phone. Fran also led program management teams
in Windows and Parallel Computing.
He has an extensive background in software development, sales, and executive
management. He came to Microsoft in 2001 to join the newly formed Windows eHome
Division where he guided the business strategy for Windows XP Media Center Edition
and later managed the strategic relationship with Samsung for Microsoft.
Before Microsoft, Fran was the CEO for an embedded systems company and spent
twelve years with Sun Microsystems in a variety of field sales, engineering, and executive roles.