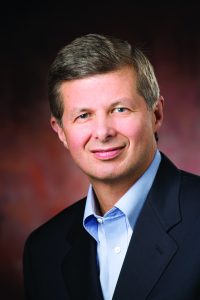 Significantly, it also highlights our company philosophy: We believe that each “pearl’s” luster is best revealed when the vineyard and wine-making decisions are made on site by the people who grow the grapes and make the wine. The Ste. Michelle Wine Estates company is simply the “string,” providing administrative and financial support for these extraordinary wine properties.

Ste. Michelle Wine Estates President and CEO Ted Baseler notes, “With Chateau Ste. Michelle as our first pearl, over the years we have developed or acquired other wineries that meet our high standards of quality and whose wines are distinctive. These wines reflect the place where they are grown.”
From Washington State’s short, warm summers and sparse soil, to the cooler climate and mineral-rich soil of the Willamette Valley to the complex soil and longer, hot summers of the Napa Valley, the terrier of each pearl on our string is as unique as each wine in our portfolio.

Ted Baseler is a regarded leader in the U.S. wine industry who dedicated his career to building Washington State into one of the top wine producing regions in the world.

Mr. Baseler is President and CEO of Ste. Michelle Wine Estates where he has been an executive for more than 30 years. He is the architect of the company’s expansion throughout Washington, winery acquisitions in California and Oregon, and development of an imported wines portfolio which includes prestige wineries from five countries.

His ‘String of Pearl’s" business strategy, where each winery ‘pearl’ is granted authority to make qualitative decisions in the vineyard and winery, is unusual in an industry that has been rife with consolidation in recent years.

Mr. Baseler began his career at Ste. Michelle in 1984 as director of marketing and was offered ever-increasing levels of responsibility, eventually becoming chief operating officer before being named president and CEO in 2001. He has focused on building a high quality portfolio which has resulted in wines lauded by critics, including Wine Spectator magazine’s coveted No. 1 Wine in the World title for 2009.

Prior to working at the winery, he had a successful career as a creative marketer of consumer packaged goods at ad agencies J. Walter Thompson, Chiat Day and Cole & Weber. He was named one of the top marketing professionals in the country by Advertising Age and “Man of the Year” by the Wine Enthusiast. In 2013, he was named by his peers to Vineyard Winery Management’s list of “20 Most Admired People in the North American Wine Industry.”

In 2015, Southern Wine & Spirits of America presented Mr. Baseler with its Lifetime Achievement Award for his “visionary guidance, creative innovation and strong leadership skills…(which) have been key drivers in solidifying Washington State’s position as the second largest wine region in the U.S.”

Also in 2015, Mr. Baseler was named the 77th Seattle-King County First Citizen in recognition of his community leadership volunteerism and public service. The Puget Sound Business Journal ranked him among the ‘Top 35’ most influential business leaders of the past 35 years.

Mr. Baseler has been a strong advocate for higher education. He was appointed by the Governor to the Washington State University (WSU) Board of Regents in 2006. He continues to serve on the board, including as its Chair from 2011-2012.

His advocacy work includes numerous projects that benefit the wine industry and community-at-large. He has been the chief advocate and leader of the project to build a world class Enology and Viticulture institution at WSU, working with the state legislature for funding. He has been the driving force behind the company’s development of scholarship programs for students in need, granting more than $3 million in scholarships in recent years.