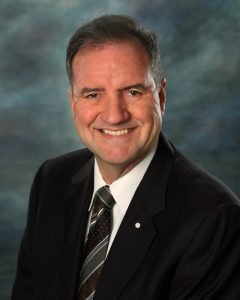 When considering stock investments, Jeff suggested we break information down into 4 areas –

What is your investment time horizon? If it is a week, you are a trader. As an investor, is it just until retirement (age 65 for most) or for your lifetime? Jeff argues it should be the latter as most people live many years after retirement.

Where will the stock market be in the next 10 years? In May 2013 (when many people thought the market was too high), an article was written “Can Dow 25,000 happen?”. Over time, people (many considered experts) have always pointed out the market is too high. Jeff showed the DOW has gained an average of 8.19% over the last 25 years.

His opinion is you should stay in the market. That means managing your fears and expectations. You should be an investor not a trader. Your time horizon should be your lifetime. You should also always consider the source of the information.

With the growth of China, India and other emerging countries, many suggest we are in Industrial Revolution 2.0 For the near term, Jeff’s opinion is US GDP for the second quarter and company earnings for the second quarter will be bad (due to the pandemic). His opinions further out are on the bright side – Unemployment will be lower (than now) at the end of the year and the DOW will be higher one year from now.

Today was a history lesson on investing. Jeff’s opinion – “Don’t time the market. Invest for the long haul!” Remember. “It’s a Matter of Perspective!”

Thank you to Steven Goldfarb and Alvin Goldfarb Jewelers for the speaker’s donation of fresh produce for Harvest Against Hunger. Also note there is on online auction for Harvest against Hunger and Kim, our Club Administrator will send out details.

The meeting was opened by President Desiree Yuzawa at 8 AM. John Schwager did the invocation and pledge while Kit Bowerman introduced our visiting Rotarians and guests.

Colleen Turner shared that summer books were distributed to low income students at Lake Hills Elementary for their Literacy Support program, which helps students avoid the summer slide during the summer break. Thank you to Colleen and BBRC for this support of the Bellevue School District.

President Desiree awarded the May Rotarian of the Month award to Jenny Andrews!Congratulations Jenny.

Girish Bhatia, BBRC President Elect, asked Rotarians to sponsor our speakers during the 2020-21 Rotary year and filled all the months! He also asked for website articles as we are redoing our website with great contributions from Dustin Walling! In addition, there is still a need for Committee Chairs and as well as committee member sign-ups!

Jeff entered the financial services industry in 1975 and in 1978 co-founded a Pension Recordkeeping/Administration and Consulting Company. In 1981, Judy Cashman joined the firm and together they built one on the largest Third Party Recordkeeping firms in the Northwest providing recordkeeping services to over 1000 retirement plans. They helped establish the original 401 (k) Plans for Costco Wholesale and Precor. They sold that company in 1996 and established in 1998, an Investment Advisory/Retirement Plan Consulting firm, Cashman Consulting and now provide advisory services to client accounts of over $600 million.

Jeff graduated from Washington State University in 1975 with a major in Political Science (Pre-Law) and while working graduated from the University of Puget Sound Law School (now Seattle University School of Law) in 1978. Jeff has been an active member of the Washington State Bar Association since 1979. Jeff has been active in State and local organizations and served on the Boards of the Greater Seattle Chamber of Commerce, United Way of King County, Multiple Sclerosis Association of King County, Chaired the Governor’s Conference on Small Business in 1987 and 1989, Bellevue Breakfast Rotary Club (President 1995-1996), Hopelink (Chair 2005-2007) and is currently Vice Chair of the Evergreen Health Foundation.

He has supported candidates for political office from both sides including Governor Booth Gardner, Representative Rod Chandler, Attorney General Rob McKenna, President’s George W. Bush and Barack Obama and Governor Mitt Romney. Jeff's motto is that he is “dogmatically pragmatic”.