Wendi Fischer and Family On Safari 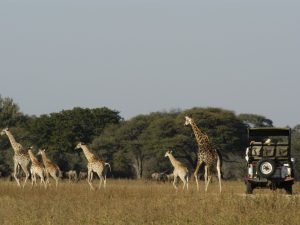 Wendi and her family went on safari at a private reserve in Zimbabwe, managed by the Malilangwe Trust.  They were there for seven days and experienced 14 drives; one drive in the morning from 6-10:30am and another in the afternoon from 4:00-7:00pm. Highlights from Wendi’s safari include:

Wendi advised all of us to put a safari on our bucket list.  However, she also advised us to splurge and not scrimp.  “Make this your big trip,” Wendi exclaimed.   She also recommended we bring a Polaroid camera because the local people love it.

After experiencing Zimbabwe and the living conditions there, Wendi was “almost moved to tears” when her kids told her they now realized how fortunate they are. When asked what she thought was the cutest animal she saw, Wendi didn’t answer.  She just told us that being there and seeing the animals was a far more vivid experience than looking at the most beautiful National Geographic photos.  Regarding the cutest animal, my money’s on the hyena.

Alan Platt, in Paul Chapman’s absence, called the meeting to order at 7:30am.

Jim Gordon gave the following invocation: As you may know, the Fleet is in town.  And as some of you know, I’m very involved with an organization called Navy League, which does Fleet Week, to get the ships here and celebrate them and their crews.  So I’d like to share with you some of the words of my favorite hymn, sometimes called the Navy Hymn.

Eternal Father, strong to save,

Who bidd’st the mighty ocean deep

Its own appointed limits keep;

Oh, hear us when we cry to Thee,

For those peril on the sea!

Heavenly father, we thank you for those men and women — those Sailors, Marines, and Coast Guardians – who man those ships and deploy in them to defend our shores, and on the high seas, to safeguard the sea lanes of commerce, which are the linchpin of our global economy.  Thank you for bringing them here, so we can honor and celebrate them and their ships.  And, as they go forth from here, we ask that You be with them and protect them as they go into sometimes hostile lands and waters, to defend our nation and the free world and make the world a safer, better place.  Amen.

John Schwager spoke about the upcoming BBRC Charity Golf Classic to be held at Eagle’s Talon Course at Willow Run on Monday, September 14.  He began by thanking the sponsors we have to date:

John asked for additional sponsors as we are $10,000 short of where we were last year.  You can be a Golf Supporter Sponsor for only $250. 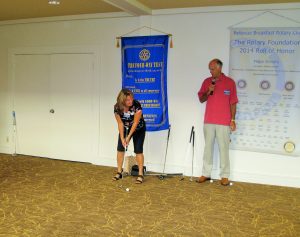 John also asked for silent auction items and presented some creative ideas.   How about a vacation rental?  Gourmet dinner?  Boat cruise?  Frequent flyer miles?  Round of golf at your club? Hole-in-one prizes include a Cobalt speed boat, Honda CRV and a Rolex watch.

One member of each table was then selected to demonstrate their putting skills and show the rest of us how it’s done.   I don’t know whether this display of athletic  prowess encouraged or discouraged members from signing up to play at the Charity Golf Classic, but it was fun to watch.

Anybody who hasn’t contributed to the golf tournament in any capacity was fined $2.  All ambassadors who didn’t wear their Rotary pin were also fined $2.

Carmela Ramaglia, with croquet stick in hand, reminded us to sign up for the Speed Croquet and BBQ Dinner on Wednesday, August 5.   This is a FUNdraising event sponsored by the Bellevue Sunrise Rotary Club.   For more information and registration details, contact Chris Eakins at 425-883-1616 or chris@chriseakins.com.

1. Dick Brown announced that Tom Helbling, who was diagnosed with leukemia last year, was doing well after undergoing a transfusion and chemotherapy.    Dick saw Tom a few days ago and he is looking good.

2. Chuck Kimbrough announced that the BBRC Annual Adoption party will be held on Saturday, October 10.  Mark your calendars.

“The only man I envy is the man who has not yet been to Africa – for he has so much to look forward to.” ~ Richard Mullin

Given that Erica Varga of Acappella Safaris was ill and unable to speak, Wendi Fischer, who just returned from a safari in Zimbabwe, volunteered to present in her place.  It was amazing how quickly Wendi emailed her photos to Michel Carter, who had them up on the screen in no time.  I'm  impressed how Wendi and Michel were able to pull it all together at the last minute and make it look so easy!