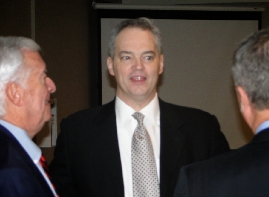 Ralph Fines — When asked who would win a battle between Herman Caine and Harry Potter Wizard, Dumbledore, Fines replied, “It depends on who has the bigger wand.”

NO MEETING DECEMBER 23 OR 30. REGULAR MEETINGS RESUME FRIDAY, JANUARY 6, 2012, WITH AN OFF-SITE MEETING AT THE RED LION

John Uppendahl – introduced a LOT of visiting Rotarians. Chuck Kimbrough, who invited and introduced our speaker, brought 14 guests but disappeared when it was time to introduce them so Jane Kuechle did the honors for Chuck.

Breakfast with Santa next Friday

Dick Brown awarded double sapphire pin to Mark Hough who leaves for Afghanistan after Christmas and asked all members to keep Mark in their prayers as he continues his important work in that country.

Kim Shrader announced that as of today, 86 people have contributed to The Rotary Foundation under the Every Rotarian Every Year program. The goal for the BBRC – and for Rotary clubs around the world – is that EVERY Rotarian contributes every year, each to the extent they are able.

The 86 BBRC members who have already made their 2012 commitments were all eligible for a special drawing of prizes contributed by members of the Rotary Foundation Committee. The winners were: Scott Sadler; Colin Radford; Desiree Yuzawa; Alan Bohling; Kevin Jewell; Larry Gill; Ghirish Bhatai; John Uppendahl and Carla Cummings.

Congratulations to all! Larry May introduced Allison (Allie) King, student of the month from Bellevue Christian School. Allie has a 3.8 GPA and is a national honor society member. She is an accomplished 3 sport athlete. In addition, Allie has served on mission trips to Mississippi and Dominican Republic where she worked with special needs kids for two weeks. This trip changed her life and brought her closer to God. She is very thankful to BCS where she feels she was pushed spiritually, mentally, and physically.

Morris Kremen has been working to get Interact Club started at Newport HS and announced to the club that it was approved last week and will launch with 10 -15 members in January. Interact club members will help with the BBRC 10K and focus on their own “Service Above Self” initiatives. Brad Bauman, Anna Cummings and Morris are the three liaisons for the club.

Tim Leahy, one of the charter members of that Bad Boys Table and chief architect of the Third Thursday Beer Brigade, was named Rotarian of the month for December. Tim has been working to help organize and support our Rotaract club and is involved in supporting young leaders through DECCA. Congratulations Tim!

REMINDER: Off-site meeting at the Red Lion on January 6th

Hunter said revenue growth in this biennium has to make up for federal ARRA funding. (American Recovery & Reinvestment Act)

The budget this biennium is $32 billion which includes a $2 billion deficit problem.

Hunter claims that some items cannot be cut due to limitations in the state constitution, including basic education and debt service. Higher education and health & human services budgets are not protected so they will be targets for budget cutting. K-12 spending is up 15% since 2007 due to inflation, more kids, etc.) Higher education budget, when tuition is added in, is up but Hunter believes that we’re hurting middle and lower income students because of tuition hikes.

Total state revenues have increased by 49% in the last decade.

K-12 grows at same rate as revenues but higher ed has grown more slowly. In the same time period, Medicaid has grown 68%, care for people with disabilities & mental health issues has grown 80%, corrections has grown 70%.

Hunter claims that the tax burden people carry has declined significantly over the same period although many tax-payers would dispute that claim.

Ross Hunter talks with members after the meeting.

Hunter said the legislature will try to get a supplemental budget before Christmas but Hunter already projects that they will fail. They need 50 votes and he feels sure that they won’t get it. He said that he is meeting with small groups of legislators trying to move people to the middle.

Hunter said that although Governor Gregoire is proposing revenue increases in the form of yet again more taxes, he is building an all-cuts budget for now. Hunter claims that Olympia is working on cost containment.

Ross Hunter who retired from Microsoft and ran for the legislature. He worked his way to the House Ways & Means Committee which he chairs. He is passionate about education policy and involved in banning a toxic substance used in computers and other products.