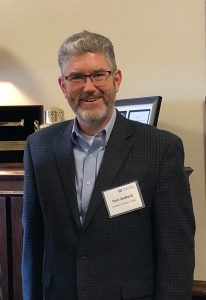 Tom DeBord, will provide an update on the exciting Project FutureCare launched in 2016, which is the largest campus expansion in Overlake’s 60 year history. This expansion includes a new 5-story patient bed tower, two new Cardiovascular Operating Rooms and three renovated operating rooms, as well a new state of the science Cancer Center.  Additionally, Tom will provide a general update on the impacts Covid19 has had on our construction project and Overlake’s day to day operations!

Time: The Zoom session will open at 7:00am for members to socialize . The meeting will start a 7:30am sharp, so please connect a few minutes before the meeting so we can all be together for the Inspirational Moment and Pledge.

Note: For security reasons the Zoom link is not posted on our club website. You will receive an email with the Zoom link tomorrow, Thursday. Please contact Club Administrator Kim Dreiblatt (clubadmin@bbrc.net or text 425-444-7906) if you are unable to find the email containing the link or would like to join us as a guest.

DeBord is a Fellow in the American College of Healthcare Executives, former board member of the Kirkland Chamber of Commerce and Overlake’s Executive Sponsor of the American Heart Association’s events including the Heart Gala and Heart Walk.

Prior to joining Overlake, DeBord served as the president of Summa Barberton and Wadsworth-Rittman Hospitals in Akron, Ohio, with 477 licensed beds, 1,700 employees and 2014 net revenues of $220 million. He also served as an executive leader of the Summa Health System. He was responsible for the day-to-day operation of the two hospitals and oversaw quality, safety, finance, growth, governance and physician/employee/community engagement for his region. In his thirty-two years in healthcare leadership, DeBord has served in the areas of executive leadership, operational management and financial improvement.

Outside of work, DeBord most enjoys spending time with his family including his new grandson Noah, as well as walking, biking and playing golf.