See you on January 19th when Glendale Golf & Country Club is open and once again available!

Our next meeting will be on Friday, January 19, 2108 at Glendale Golf & Country Club!

Happy Holidays to All and Thank You to All who contributed to this years’ Giving Tree.

We collected over $1,250 of gifts and $175 of gift cards, all donated to Hopelink’s Bellevue facility.  Hopelink and their merry helpers will distribute these gifts throughout the community.

Special thanks to Clint Merriman and his company Insperity for their generous donation of toys and socks. 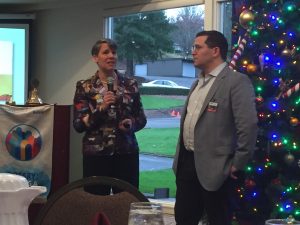 Let’s close the skills-gap here in the United States.  Literally, millions of jobs sit vacant because there’s little infrastructure in-place to provide training and a vocational education for well-paying jobs.  The per capita income in Switzerland is approx. $80K.  In the United States, approx. $60K.

So very honored to have Suzi and Eric LeVine join us today at the Bellevue Breakfast Rotary Club.  Their presentation on how the United States should replicate the Swiss Vocational Education and Training System was spot-on.  Such a program is desperately needed here in the United States. 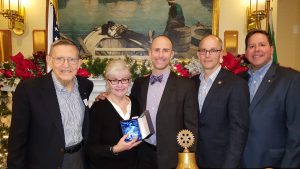 Today, the University District Club hosted Rotary First Harvest’s 2017 Shanahan Awards.  This year 3 awards were given.  The first was presented to Kris and Erick Ringsrud.  The Ringsruds have an apple orchard in Cashmere and have generously donated thousands of pounds of apples to RFH.  The second award was presented to Ed Taylor of Taylor Driving School.  TDS has been crisscrossing the state, hauling over 250,000 lbs. of produce.

The third award was presented to the Carter Family in memory of Michel Carter.  There was a tribute video (CLICK HERE) presented then Adam Mihlstin and Howard Johnson provided comments about Michel, BBRC, Rotary and RFH.  Rachel and Brian Carter were in attendance to receive the Shanahan Award – a beautiful crystal apple etched with Michel’s name and a fitting tribute to his many contributions to RFH.