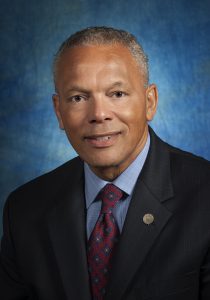 President Paul started the meeting by introducing Steve Szirmai did the invocation and Girish Bhatia led the club in the pledge and introduced the visiting Rotarians and guests.

Chris LeRoux is in charge of greeters this year. He passed around a schedule before and during the meeting for signups. Hopefully everyone signed up. Remember, we work here. We are not guests.

Adding to the theme of “we work here”, President Paul announced that committee signup sheets were out. I signed up at the end of the meeting and there were not a lot of names. Please get signed up and make this easy.

Chuck Kimbrough introduced Jonas Larsson. Jonas was a Rotary exchange student back in ’88 ’89 and he stayed with the Kimbroughs. He is now an aerospace engineer and he gave a short dissertation on how the exchange program changed his life.

Jeff Cashman and Dick Brown gave out Paul Harris awards to the current group of recipients. Tim Leahy, Paul Osborne, and Fred Janssen all became Paul Harris fellows by donating $1000 and got plaques in commemoration. Tom Leonidas got an emerald pin for reaching the $2000 mark. Dick Brown awarded Jeff a 3 ruby pin for getting to the $9000 level.

Girish Bhatia gave a pitch for bringing in new members. President Paul added that this is a priority.

Chuck Barnes gave an update on the health of current member and Past President Jim Owens. Jim has had a reoccurrence of myeloma complicated by his dementia. His wife Katie says he is still a trooper for Rotary. He wants to know the day of week every visit so he can set his alarm for Friday’s Rotary meeting. Past President Bob Maloney had surgery to remove a cancerous thyroid and some lymph glands. Please keep both of these gentlemen in your prayers.

The Sergeant at Arms Ann Norman held a spelling contest around her title. Spelling must not be a strong suit in the club as she left with a fist full of dollars.

Dennis Newell, new returning member (he was slumming with the Kirkland club) introduced the speaker J Paul Blake, Director of Communications and External Relations at the Daniel J Evans School of Public Affairs. He started his talk about a reunion with a friend, a prominent Copacabana Club Rotarian who he met more than 30 years ago as member of a Rotary Group Study Exchange team from Minnesota. It was a travelogue complete with pictures.

He started on his discussion of the school by saying the name had just been changed from School of Public Affairs to School of Public Policy. He discussed the exciting new developments at the school along with a host of awards the school has received. The school is the University of Washington’s largest graduate-only degree program. It is for public and nonprofit. It was revealing to learn that these people are actually educated in what they do.

PPC’s thought for the day: Education is the most powerful weapon to change the world.

After 14 years in municipal government, J. Paul Blake returned to higher education as Director of Communications and External Relations at the Daniel J. Evans School of Public Affairs at the University of Washington in July 2014. The program is ranked ninth among the nation’s 266 public affairs programs and fourth among public institutions.

His professional service includes three terms as president of the Evergreen Chapter of the American Society for Public Administration (ASPA) and two terms on ASPA’s National Council. Additional boards and committees includes the Advisory Board for the University of Washington Public Relations and Strategic Communications Certificate program and the Public Affairs Council of the Seattle Metropolitan Chamber of Commerce. I'm a member of the International Association for Public Participation, the National Coalition for Dialogue and Deliberation, the Seattle Association of Black Journalists and Blacks in Government.