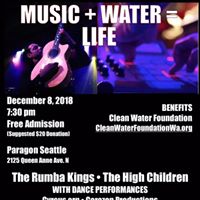 Leon McLaughlin, President of the Clean Water Foundation, discussed the projects they have been involved with to place water purification units in third world countries in South America, the Ukraine and Africa. The units vary in size depending on the size of the population they need to support. These projects were done in partnership with organizations with “boots on the ground” including Rotary, World Vision, Starbucks, Peace Corps and the Gates Foundation.

Johnny Bacolas then discussed their vision of “MUSIC + WATER = LIFE”, a project to mirror the “We Are the World” campaign, culminating in a concert similar to “Live Aid in 1985” which helped raise funds for the still ongoing Ethiopian famine. The Rumba Kings would organize this large-scale benefit concert with 5 to 9 Latin-style artists, with an accompanying theme song and music video. The profits would go to the non-profit Clean Water Foundation for the purpose of manufacturing and distributing water purifying units for third-world countries.

Next Johnny showed a short video entitled “A Conversation and A Scotch with the Rumba Kings”! For this video Johnny Walker or another well-know Scotch brand would be the sponsor with a bottle of their scotch prominently displayed on the table during the conversation.

After the meeting was called to order by President Chris Boland, Jim Gordon presented the invocation and flag salute and Janell Johnson introduced visitors. Tanya Franzen-Garrett presented our March Student of the Month plaque to Adam Graves of Bellevue Christian High School. Colleen Turner discussed a discount for Walk/Run participants while John Martinka announced sponsorships for the AI4A Walk/Run have exceeded last year’s!

Sam Peterson reminded everyone to sign up as a volunteer. Our Sergeant of Arms, Carmela Ramaglia gave fine waivers to Howard Johnson, Chris Boland, Steve Roberts and Colleen Turner.

Happy buck ($$) discussion items included: Kim Shrader with a new grandchild; Jim Gordon whose daughter is expecting August 26; and John Cherry whose grandson is going to Gonzaga on a baseball scholarship! Jenny Andrews also announced she highly recommends the play at the Village Theatre “The Curious Incident of the Dog in the Night-time. Before the meeting was adjourned President Chris, Chuck Kimbrough reminded everyone that the retreat at Port Ludlow is May 2 and 3.

Johnny Bacolas is a professional musician, music producer, studio engineer, and music video director from Kirkland, Washington. He is a first generation Greek-American born to Greek immigrant parents. Johnny has been a member of two very successful rock bands in the past that went on to have national and international success. The creation of his newest group with business partner, George Stevens, called The Rumba Kings, has been one of his life’s dreams. This dream, now after years of underground hard work, has surfaced and come to fruition.

Johnny has performed thousands of concerts and promoted several himself. Currently Johnny and George Stevens are executive producers of a concert for The Rumba Kings on Sunday April 7th at The Kirkland Performance Center. 7:30pm. Johnny is the producer and promoter for this event.