Lacrosse - Past, Present, Future of the fastest game on two feet 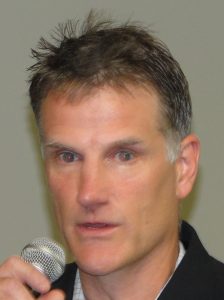 Bob Holert introduced Tim Moriarty, who delivered a presentation on Lacrosse Past, Present, Future — The Creator’s Game. Tim began by telling us that lacrosse is the fastest game on feet.  He then asked, “How many of you think hockey is the national sport of Canada?”  Although a number of us

aised our hands, we were wrong and were asked to put $1 on the table.  Since when does the speaker pretend to be Sergeant-at-Arms?   Tim told us that lacrosse is actually the national sport of Canada.  Who would have thought?

The game originated around 1400 by Native Americans and was played for religious reasons, to train warriors and to celebrate harvests.  The Native Americans believed the Creator gave them the game.   Lacrosse was first played on a field two miles long and teams had as many as 1,000 players.  It was actually more of a fight than a game. Lacrosse was first observed by French explorers around 1630.  The early lacrosse sticks were made from hickory and Tim showed us some pictures of them.

William Beers, a Canadian dentist, started the Montreal Lacrosse Club in 1856.   In 1876, New York University was the first college in the US to form a lacrosse team.

In the modern men’s field game, there are 10 players per side and the field is 60 yards across and 110 years long.   Possession is based on faceoff at midfield at the start of the game and at the start of a quarter or after scoring.  Men who are talented at facing off (called FOGOs for Face Off Get Off) are eligible for college scholarships.  A typical score is 15-13.

In the modern women’s field game, there are 12 players per side and less protective gear is worn because there is much more finesse involved and no contact is allowed.

Box lacrosse, also known as indoor lacrosse, is an indoor version of lacrosse mostly played in North America.    It is played between two teams of six players each, and is traditionally played on an ice hockey rink once the ice has been removed or covered.  The playing area is called a box, in contrast to the open playing field of field lacrosse and it is a very fast-paced game.

There are currently 416 women’s college teams and 318 men’s college teams in NCAA Divisions 1, 2 and 3.  Major League lacrosse started in 1998 and 8 teams play summer schedules.  Most players have regular jobs.  Paul Rabil is a member of Team USA Lacrosse and was the first lacrosse player to earn $1 million.  Drew Snider is the most prominent local lacrosse player.  He plays for the Denver Outlaws and is the boy’s head lacrosse coach at O’Dea High School in Seattle.

Tim’s team is Newport Sammamish Interlake Lacrosse which was formed in 2006 and currently has 200 players from 3rd graders to high school seniors.  The team is a member of the Positive Coaching Alliance, which is a national nonprofit developing “Better Athletes, Better People” by working to provide all youth and high school athletes a positive, character-building youth sports experience.  It was interesting to see a video with members of competing lacrosse teams lining up after to game to honor the game.

Members of Newport Sammamish Interlake Lacrosse are required to do a community service project like Rotary First Harvest.  The team provides both financial aid and equipment for members who can’t afford the cost to participate.  Last season, the team provided $7,000 in scholarships. The Washington High School Lacrosse Association (WHSBLA) is in the early stages of its year long plan to petition the Washington Interscholastic Activities Association (WIAA) to sanction the sport of lacrosse in the Washington State High Schools.

Wendi called the meeting to order at 7:30am.  Jason Cherney gave the invocation and pledge and Dustin Walling introduced visiting Rotarians and guests.

Wendi announced that former BBRC Charter member and past District Governor, Dick Clarke, had passed away.  Instead of a moment of silent, we stood up and gave Dick a round of applause in his honor.

Wendi reminded us all to sign up for the BBRC Charity Golf Classic which will be held at the Eagle’s Talon Course at Willow Run on Monday, September 8.

undergoing a brand makeover.   Like peanut butter sticks to the roof of your mouth, a brand should stick to the roof of your brain.  We need a name, a story, and a visual look that positions us for the future and the Bellevue 10K/5K/Run/Walk/Kid’s Dash just doesn’t cut it.   Our focus will be on autism rather than a specific institution like Seattle Children’s.   Nic is looking for member input about the rebranding so we all should be receiving a survey shortly.  Please tell him how you really feel.

Tim was booed in the usual fashion as he strode to the front of the room to play Rat on a Rotarian.   You can be sure that if a fellow member rats

on you about your accomplishments, you will be fined.  It’s just a question of how much. Lennie Lutes put $20 on the table because his company, Arscentia, was named one of Eastside’s Fastest Growing Companies by the Puget Sound Business Journal.   Kit Bowerman was also fined because his pet clinic, the Cat & Dog Clinic of Bellevue, was named the #1 animal hospital by the Bellevue Reporter based on the number of qualifying votes received.  Congratulations Lennie and Kit!

1. Kit Bowerman requested that we procure silent auction items for the golf tournament.  Last year, Tim Moriarty won a year’s worth of cookies baked by the femmes fatales of the BBRC.  He loved receiving the cookies every month and will bid again this year.  “It’s like Christmas every month,” Tim said.  Traci Tenhulzen purchased a bed & breakfast package to see John Cherry’s bees at his spread on Orcas Island and had a wonderful time.

2.  Paul Osborn stated that every BBRC committee has its own Web site to post announcements and encouraged members to take advantage of this new feature.

3.  Wendi remembered the members to sign up for at least two committees.

4.  Nic announced that Colleen Turner was the new administrator for the BBRC Facebook page.

5.  Bob Holert announced that Kevin Mather, the President of the Seattle Mariners, will be speaking next week.

“Those who bring sunshine into the lives of others cannot keep it from themselves.”  ~ James Matthew Barrie

Tim has been active in the local lacrosse community since 1982, first as a member of the Bellevue High School lacrosse program and then playing club lacrosse at the University of Washington. In addition, he has 10 years of post collegiate lacrosse in the Seattle area.

Tim is the President of the Newport Sammamish Interlake (NSI) lacrosse program serving over 200 youth in the area and has been coaching the 7-8 and JV lacrosse teams since 2009. Tim will be sharing with you today the past present and future of the "fastest game on two feet."