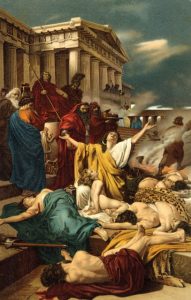 What is Chanukah?  Festival of lights at the darkest time of year.  Commemoration of Maccabean Revolt to the Cerean Greeks.    Rabbinic refocus on God and on the miraculous.  Minor festival!

167 BCE: Antiochus gets serious about subversion

Temple captured, reconsecrated and beginning of Hasmonean Dynasty.   This is the celebration of Chanukah.  Taking back the temple and lighting the menorah.  They had enough oil to last one day.  The menorah was lit and the light lasted for 8 days.

A menorah has 8 candles plus one extra candle to light the other candles.

Chuaukah is celebrated on the 25th day of Kislev of the Jewish Calendar.

Senior Rabbi Daniel Weiner believes passionately in building Judaism for the 21st century and in healing the world through social justice. Temple De Hirsch Sinai has grown to more than 4,000 members and 1,500 families in two campuses in Seattle and Bellevue since he became Senior Rabbi in 2001.
His innovations in worship include producing “rabcasts” on video, bringing services to travelers and shut-ins on the Internet and leading a rock band in popular Rock Shabbat services. He tweets @rocknrabbidanny.
Rabbi Weiner and his team are proud to have won the Religion Action Center’s Fain Award for their campaign on gun responsibility. Rabbi Weiner is a founding member of the Washington Alliance for Gun Responsibility, which drafted and helped pass Initiative 594 in 2014. Work on implementation of the law and about gun responsibility continues.
His columns have appeared in The Seattle Times and the Seattle Post-Intelligencer. Weiner wrote “Good God: Faith for the Rest of Us” about the dangerous polarization between fanatical faith and soulless secularism.
Weiner is married to Cindy Tepper Weiner of Baltimore. They are the proud parents of Julia and Benjamin. He frequently enjoys the glorious climes of the Pacific Northwest while walking their black lab, Sadie.