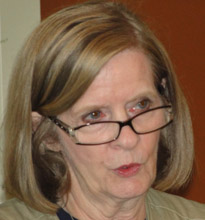 Jane Kuechle introduced us to the many facets of the Issaquah Salmon Hatchery.  This year is their 5th anniversary and they celebrating many successes and facing some significant challenges in funding and maintenance.  They anticipate that this spring they will release 1.8 million Chinook and 1.2 million Coho into the stream.  Alex Rule announced that Preserve Planet Earth will have a Mercer Slough project October 22 and he needs lots of volunteers.  Chris reminded all that Rob McKenna, candidate for Governor, will be our speaker next Friday.

President Chris Monger introduced Jane Kuechle of the Issaquah Salmon Hatchery, our speaker for the morning.

Jane Kuechle presented a history of the Issaquah Salmon Hatchery as BBRC met at the Hatchery Visitors’ Center.  This year was the 75th Anniversary of the establishment of the Issaquah Salmon Hatchery. The project started in 1935 as a Works Project Administration (WPA) Project. The property where the hatchery is now located was known as the “John Holmes Property” but was actually an Issaquah city park. With $35,000 from combined city and state contributions the project started as an asset and showplace for the community. The hatchery began operation in 1937.

Prior to the construction of the hatchery there were no fish in Issaquah Creek. Early logging operations had used the creek as a flume to float logs to Lake Washington. The logs essentially scoured the creek, destroying habitat and making the waterway unusable for fish. Coal mining in the area also contributed to degrading the creek due to lack of control of debris runoff from the mining operations.

Initially 3 inch Chinook salmon fry from the Green River were planted at the hatchery but subsequently 35,000 Green River Chinook Salmon eggs were deposited at the hatchery. Initially salmon in the hatchery ponds were fed ground up animal meat but this did not provide all the nutrients needed by the developing salmon. Artificial balance food was then used to properly support salmon development.

Shortly after beginning operations, the Issaquah Salmon Hatchery was rated as the “World’s Largest Hatchery” with a 1.5 million egg hatchery capacity. In 1949 and again in 1952, improvements were made to the hatchery. In 1980 the circular ponds with rotating flow were replaced by linear ponds with uni-directional flow so that the salmon were not restricted to swimming in a circle.

The hatchery was near to being closed in 1992 due to inadequate funding and the “Friends of the Salmon Hatchery” was formed. This group has lobbied public bodies as well as gaining other funding to perpetuate the hatchery operations. In the late 1990’s new holding ponds with viewing windows were constructed along with a new dam, bridge and visitors’ center.

The hatchery uses volunteers for much of its operations. Volunteers lead tour groups including 9,000 school children per year visiting the hatchery. There is a theater which continuously shows a film on the life-cycle of salmon. At present the hatchery produces no Sockeye but they anticipate this spring in releasing 1.8 million Chinook and 1.2 million Coho from the hatchery. The hatchery is also raising Kokanee, a land-locked or lake salmon. They reside in Lake Sammamish and spawn in creeks that flow into the lake. Habitat is compromised for Kokanee in the lake and much restoration work needs to be done.,

Funding is a continuing problem, particularly with respect to maintenance. Major concerns are a leaking dam bladder and a bridge which has pier scouring. A major improvement contemplated is removal of the dam and restructuring the area upstream to replicate the water retention of the dam without blocking fish passage or using a fish ladder. This will allow natural spawning which is limited with the present dam configuration.

Chris rang the bell at 7:40 am and introduced John Schwager, who led the invocation and flag salute followed by Jeanne Thorson, who made the introductions of visiting Rotarians and other guests.

Chris reminded all that Rob McKenna, candidate for Governor, will be our speaker next Friday and needed to have a head count of those bringing guests. He also emphasized that due to time constraints, the speaker will begin at 7:25 and leave at 8:00 am sharp. Club business will follow the speaker this week.

We need ten more drivers for the Adoption Party!

REMINDER! THE FRIDAY, SEPTEMBER 28, MEETING AT GLENDALE WILL START WITH THE SPEAKER, ROB MCKENNA, AT 7:25; BE THERE!

Unless someone like you cares a whole lot,
Nothing is going to get better. It’s not.

Jane works for the Hatchery after a stint with United Way. Jane is a long-time member of BBRC.