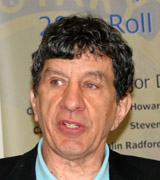 Bill Grace spoke to us about enriching the common good for all.  He emphasized that we should consider the long term view in our quest for stewardship.  Katherine DeStephano cheered us all with the news that we earned more than $90,000 from our 10K race!  Bryce & Bree Oldham from Bellevue Christian School were awarded plaques as our joint students of the month.  Laura Adams Guy spoke about her life and career.

Paul Martin introduced Bill Grace.  Bill started his presentation with a quiz: What comes to mind when you hear the words “common good”?

Frances Bellamy wrote the Pledge of Allegiance during the Civil War and Bill noted that he must have been a good man to write that pledge which included the words “with liberty, equality, and justice for all”. He took the pledge to the sitting congress which told him that he needed to delete the word “equality” for all.  It was removed and we now recite it as Congress mandated.

Bellamy probably used the word “all” more liberally than we do. At that time,“all” probably excluded women, people of color, young people and people with developmental problems. We in this room are probably accustomed to charity that helps us live more civilized lives with each other. In addition to charity we also needed to incorporate “justice” into our world. Bill used the analogy of being invited to the campfire – if you’re invited to the warmth and the light, life is good. If not, because you’re marginalized, you’re out in the dark.

We need to identify who is uninvited to the campfire here in Bellevue on our watch. Here is a challenge to our club: what would it mean to consciously embrace the work of charity but also the work of justice? We’re not there yet.

Third Circle Leadership: imagine three nine year old kids, it’s mid-morning in the summer, they’re headed, independently, to the store to get their favorite candy bars but they left their money at home. Each is struck with the same question: Should I steal this candy bar? They all decide no but for different reasons:

1) I don’t’ want to go to juvenile detention – this approach is self-oriented – me focused.

3) If I owned this store, I wouldn’t want someone to steal from me so I won’t steal from them – this approach is principle oriented – for the good of all.

First circle self-orientation is fine when you’re two or nine or 16 but if adults stay there it is sad, sick and evil.

Second circle people are good people – they volunteer to pick up mail, help out whenever needed; the second circle is bounded by “what will my neighbors think of me”? They want to be in with their peer group. Bill then cautioned us to think about Hitler’s Germany. When asked to step outside of what is deemed appropriate by peers, second circle people get small. You cannot advance the common good from the second circle because we’re so worried about what our peers think that we leave the tough work to others.

Third Circle people behave based on core values. If you commit to your core values, that’s your ticket to creating the common good for all.

Bill related a true story. A meeting occurred a few years ago in Oxford, England in a 500 year old room built of stone with 14 pairs of oak beams coming together to hold up the whole edifice. A young man glanced up and saw something darting across the beams. The group had the beams inspected and found that all of the beams are infested with beetles and no one should meet in the room until it could be fixed. They needed twenty-eight 500

year old oak trees to fix the problem. They met with a forester who said he completely understood the problem. He took the dean on walk on a road in the woods. The dean continued to talk about the problem as they walked. The forester stopped the dean and said that when the forester’s predecessors cut the original oaks to build the building 500 years before, they insisted that they plant 100 oak trees to replace the original ones when the time came. That’s stewardship! Have we ever been asked to think 500 years down the road? Most of us only think about today.

The longest cycle we think about today is the four year election cycle. The common good involves not only third circle thinking but also a grand vision that extends far longer than we are accustomed to thinking about.

John Martinka thanked Bill for his presentation by giving him a certificate denoting a 1000 pound gift of food for Northwest Harvest.

Katherine DeStepahno reported that we will net about $90K from the Bellevue 10K. She brought up her whole team which was half the club and thanked them for their help. Kudos to everyone who helped with the race!

District Assembly: June 2, 2012 from 8:00 AM to Noon at Seattle University – District Governor-Elect Steve Lingenbrink came encouraged everyone to attend the district assembly. Project Rotary will be launched at the assembly with the goal of attracting new, young and interesting people to Rotary.

Rotating the Wheels will take place in June at Redhook Brewery. Registration will be online soon.

Rotary First Harvest – Seattle 4 is nipping at our heels and we need at least 56 members to show up before the end of the year. Please plan to attend the May 12 or June 9 work party!

Bree is a strong athlete, great student, and has served on several mission trips with Bellevue Christian School. She will attend Baylor University in the fall. At BCS, Bree learned the importance of asking for help from others and recognized that she can go further with their help. She’s learned to approach people who are sitting alone to engage them which is outside her comfort zone but she feels enriched by it. Bree feels blessed that she has been able to go along with her twin brother and interact with his friends.

Bryce is a state level athlete who is headed to Calvin College in Michigan in the fall. Bryce started high school without much vision but realized in sophomore year that he needed to work harder and be a more committed student. He worked hard, got good grades and was accepted by all of the schools he applied to. He is very excited about college. Bryce has been involved with Young Life and has lead Bible Study for freshmen. He went on mission trip to El Salvador which he said was very humbling. BCS enriched him in many ways. In a touching moment, Bryce said, “I wouldn’t be the man I am now without my sister. I love my sister – this might sound cheesy – but she has helped me in so many ways. She’s my best friend.”

Not to be outdone, Bree responded by publicly stating how much her brother means to her.

Classification Talk – Laura Adams Guy has been in the club almost one year and is already serving as a host-mother to our exchange student Farina. Way to get involved, Laura! Laura’s classification is media productions. She was born into the Cosacchi family which has been in the area since the 1960s. Her father was an FBI agent and her mom was a school teacher in Seattle. Lauraent attended the University of Washington with Wendi Fisher and was in the same sorority. She attended Ohio University for her master’s degree. Laura has two sons. Laura’s marriage ended when her kids were little and she was a single mom working long hours at KCTS for many years. Recognizing the need for a more flexible schedule, she left that job and launched her own business LaConrick Communications. She works with PBS producing documentaries and also runs Sunny Wonder Media, doing media production for communities and businesses. Laura is currently in the research funding phase of PBS documentary on 1920s immigration from Ireland. Laura ha remarried and inherited two kids, one of whom is 30. Welcome to the BBRC Blue Badge Crowd, Laura!

Youth Exchange Committee – If you can host an exchange student next year, please speak with Ann Norman .

David Hume – when men are most sure and arrogant, they are most assuredly wrong.

Bill is an activist and teacher of common good. He worked at Seattle U and founded the Center for Executive Leadership where he served as executive director for 15 years. Bill’s work promotes the common good.