Bob Holert introduced Dick Blumenthal, author of four maritime-related books. Dick began boating on the north shores of Lake Washington at age five. His “yacht” consisted of an eight foot homemade dingy and a pair of oars. He quickly learned how to row, spending many hours fishing and exploring on the lake.  Girish Bhatia and Steve Roberts delivered a presentation on the Congregation for the Homeless Day Center at the Bellevue First Congregational Church. Christine Rose and Katherine De Stephano thanked the Club for all of the work done on the Bellevue 10K.

Bob Holert introduced Dick Blumenthal, author of four maritime-related books. Dick began boating on the north shores of Lake Washington at age five. His “yacht” consisted of an eight foot homemade dingy and a pair of oars. He quickly learned how to row, spending many hours fishing and exploring on the lake. By age seven, he graduated to a three-horse

Evinrude, an engine that seemingly weighed as much as he did. From this early exposure to water, Dick’s interests continued to grow. Throughout his childhood, as well as later in life, he cruised the San Juans with family and friends, learning of the secrets held by the numerous islands. With his long-time experiences on the water, in the late 1990s Dick became more interested in local maritime history. Because of that interest he now has four books in print.

Dick announced that he no longer cruises around in an eight foot dingy. His most recent book, Maritime Place Names, Inland Washington Waters explores the origin of the name of every place identified on current inland waterways charts. He stated that one doesn’t have to be a boater to enjoy this book; one need only be interested in the early history of the area.

Dick spoke about George Vancouver, an English officer in the British Royal Navy who explored the inland waterways in 1792. To chart the area, Vancouver and his crew used sextants to measure angles between points of land. Most of this work was done in small craft propelled by both sail and oar. He moored in Discovery Bay, which was named after his lead ship, the HMS Discovery. Vancouver named many of the features he charted after friends and associates, including: 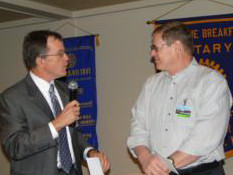 Charles Wilkes was an American naval officer who explored inland Washington waters in 1841 with three to four times as many boats as George Vancouver. Wilkes was responsible for naming several hundred features in the inland waterways, many of whom were named after heroes in the War of 1812.

Harstine Island was named by Wilkes for Lt. Henry J. Hartstene (or Hartstein or Harstine). Over the course of his life, Hartstene wrote his name three different ways.

None of the San Juan Islands retained the names that Wilkes chose for them. However, all of the names chosen by Wilkes for features in the South Sound stuck.

Chris Monger called the meeting to order at 7:30am with a music eye opener, Ain’t Too Proud to Beg, by The Temptations. 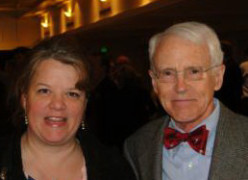 “Dear Heavenly Father, we thank you for this gathering of Rotarians and friends, united in the spirit of fellowship and service. We thank you for the opportunity we have to serve others through Rotary and through our professions. We’re so grateful for Rotary and the good work it does to advance international understanding, goodwill, and peace throughout the world and for the bonds and friendships we’ve made, because we’re a part of it. And we thank you for our great good fortune to live in this incredible country of ours, this land of freedom and opportunity – the freedom to think and believe whatever we choose and the opportunity to succeed or fail. This country, with all its faults, is still the greatest nation ever created on this earth. And we ask you to help us always remember and honor our men and women in uniform, who serve our country every day to defend those freedoms and keep us and our families safe from harm. We ask this in your Holy Name. Amen.”

Laura Adams Guy introduced visiting Rotarians, Rotoractors and guests. Chris Hazelmann was a visiting Rotarian from Seattle 4 and Barrett Henry and Stephen Erni were our visiting Rotoractors. Dick Brown reminded us to sign Norm Johnson’s Book of Memories, which will ultimately be presented to Carolyn Johnson.

The CFH Day Center provides homeless men a place to relax and access lunch and drinks. In addition, showers, laundry, hygiene items, bus tickets, computer access, resume and job search help, one-on-one case management, nurse support, and clothing donations are offered to those in need of these services. The CFH Day Center can accommodate up to 60 men per day.

A grant from the BBRC paid for the washers and dryers and helped to build out the restroom.

Antigua Computers for the World Project

Laura Adams Guy showed us a video she produced about life in Antigua while she was participating in the Computers for the World Project. Laura stayed with a local family and in her video she captured many school children laughing and grinning from ear to ear enjoying life in Antigua. A group of them gave a big thanks to Rotary for the Computers for the World project. The video also showed the kids from Newport High School setting up a local school with computers. The kids from Newport High School will be sharing their experiences at a later date.

Christine Rose and Katherine De Stephano thanked the Club for all of the work done on the Bellevue 10K. To date, we have raised $63,215 toward our goal and have registered 249 runners. Our goal is to ultimately register 2,600 runners. During the registration process, you will be asked how you found out about the race and who referred you. Please indicate that you found out about the race through Rotary and that you referred yourself. This helps Jane Kuechle to give you credit.

John DeWater showed an amusing video promoting the Rotary District 5030 Conference to be held at the Coeur d’Alene Resort from May 3-5, 2013. The theme is To Russia With Love and John encouraged everyone to sign up at www.Rotary5030conference2013.org. Scott Sadler announced that the BBRC Retreat would be held at the District Conference on Saturday, May 4 from 12:00pm – 3:00pm.

Chris announced that March 22 is World Water Day, an initiative to raise awareness of water scarcity issues. Chris reminded us that many in the world don’t have potable water.

Chris presented Glenn Foster with his Blue Badge. While presenting it to him, Chris asked Glenn what was most rewarding in the process of fulfilling his requirements. Glenn responded, “Getting to know everybody.”

1. Chris announced that Wendi will be filling in for him next week. Dr. Malcolm Duthie, will be speaking on Leprosy: Applying Modern Technologies in the Fight Against an Ancient Disease

2. Jane Kuechle reminded everybody about the Partners for Work program

3. Ruben Ladlad announced that we are distributing dictionaries to 3rd Graders in four Bellevue elementary schools. Ruben is seeking volunteers.