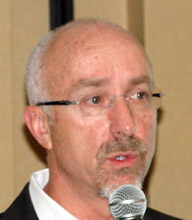 Paul Davis, CEO of Coinstar, described the company as a leading provider of automated retail solutions offering convenient services that make life easier for consumers and drive incremental traffic and revenue for retailers.  We bid farewell to Farina, our exchange student as she heads home to Germany.  Scott Sadler pumped us up for our upcoming BBRC Charity Golf Classic.  SAA Tim Johnstone charged Ann Norman a Flat Tax of $10 for receiving the Volunteer of the Year award from WSCPA.

The title of Paul’s presentation is Success through Innovation. Paul started by giving us a brief overview of Coinstar which is headquartered in Bellevue and celebrated its 20th anniversary last year.

Redbox started as an experiment with McDonald’s in 2002. Today, there are 36,800 Redbox kiosks located at leading grocery stores, mass merchants, drug stores, restaurants, and convenience stores. Approximately 68% of Americans live within a five-minute drive of a Redbox kiosk. Redbox offers a convenient rent-and-return anywhere policy and has rented over 2 billion discs to date. Redbox has 4.7 million Facebook fans. On February 6, Redbox announced a joint venture with Verizon. The venture’s services will offer all of the convenience, simplicity and value of Redbox new release DVD and Blu-ray Disc rentals combined with a new content-rich video on-demand streaming and download service from Verizon.

Paul is proud of Coinstar’s culture of innovation and encourages teams of employees to brainstorm new ideas for automated retail. Below are eight ideas that will come to market in the near future:

In numerology, the number twelve is considered the number of completeness, as reflected in the twelve months of the year, twelve hours of the clock, twelve gods of Olympus, twelve tribes of Israel, twelve Apostles of Jesus, the 12 successors of Muhammad in Shia Islam, etc., whereas the number thirteen was considered irregular, transgressing this completeness. There is also a superstition, thought by some to derive from the Last Supper or a Norse myth, that having thirteen people seated at a table will result in the death of one of the diners.

In an advice column, like Ann Landers, Dear Abby or Dear Amy, the columnist responded to one complainer: “Put on your big girl panties and deal with it!”

If you can’t “deal with it”, whatever “it” is try a little faith in the deity; Allah, Buddha, God or Yahweh.

Ann Norman announced that our lovely exchange student, Farina, would be leaving for Germany tomorrow. Farina came up to the front of the room dressed in a jacket with pins of all the places she had visited during her stay here; both the front and back of her jacket were covered. Is there anywhere Farina hasn’t been? Farina thanked her three host families, Rourke O’Brien & Sayoko Kuwahara; Morris & Carolyn Kremen; and Mike Ralph. She mentioned that she had become addicted to sushi and particularly enjoyed the Western Safari program. The BBRC will be hosting an exchange student from Finland this year and Ann is currently looking for host families that live in the Bellevue High School District.

Scott Sadler thanked all the sponsors individually for their contribution to the BBRC Charity Golf Classic and Ruben Ladlad encouraged everybody to do business with our sponsors. There are currently 104 players signed up and Ruben is looking for 20 more players. He is also looking for additional volunteers.

Kit Bowerman announced that 11 items for the silent auction have been donated and he is looking for more. Kit reminded us all to bring a bottle of our favorite beer to the meeting next week; the BBRC beer collection will be yet another item for the silent auction. Given that the BBRC Charity Golf Classic will be held on July 23, there will be no meeting on Friday, July 27.

Tim Johnstone asked Ann Norman to come to the front of the room. Tim announced that Ann Norman received the Volunteer of the Year award from the Washington Society for Certified Public Accountants (WSCPA) for her work as Chair of the WSCPA Taxation Committee. Ann was charged a “flat tax” of $10 for the recognition she received.

Katherine De Stephano announced the new Sponsor of the Month program where one BBRC member per month would pay $160 to sponsor the BBRC donation of 1000 pounds of produce given to Northwest Harvest in the name of the speaker at our Friday morning meeting. It took Katherine all of two minutes to line up sponsors for the next 12 months. Katherine’s company, Escape Outdoors, is the sponsor for July.

1. John Martinka recently submitted the grant application for the Computers for the World project in Antigua.

2. Chuck Kimbrough asked members who have friends who are members of private golf clubs to find out if their golf club would be willing to donate a round of golf to the BBRC Charity Golf Classic silent auction.

“If all are thinking alike, than no one is thinking.” –Walter Lipmann

Paul joined Coinstar in April 2008 as Chief Operating Officer and became Chief Executive Officer in April 2009. Throughout his career, Paul has held various sales and executive management positions, including CEO of Kettle Foods, President of Starbucks North America and President of PepsiCo’s Frito-Lay Company in Canada. In May, it was announced that Paul was ranked fourth by Fortune Magazine on its Fortune 500 list of Technology Visionaries. Paul is recognized among an esteemed list of Fortune 500 business leaders for his success in expanding the Redbox self-service movie and video game rental business from an innovative young company to an industry leader in movie rentals.