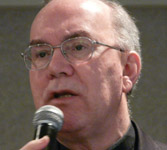 Father Steve Sundbor, President of Seattle University, spoke of 3 inspiring students who have made a profound impact on him.  BBRC past presidents acted as greeters and stood to be recognized.  Larry May introduced the Bellevue Christian Student of the Month Sarah Tandon.  Rourke O’Brien introduced the Rotary Ambassador concept for members with life style changes making it difficult to attend meetings.  Aisha Kabani introduced our outgoing Rotary exchange Student.  Chris Monger stress the need for strong support for District Governor-elect Steve Lingenbrink during our Retreat which will be rescheduled to coincide with the District Conference.

Father Sundborg stated that there are approximately 8000 students at SU, but he was narrowing his talk to just three who made a profound impact on him. In his view, these three students struck him because they put a face on world issues.

Khaled was born in modern Palestinian near Bethlehem, where his ancestors have lived since the times of King David, 1000 years before Jesus was born there. Khaled has eight brothers and sisters, and he was raised as a Catholic. His school closed when he was 11. He went to work in the bakery, but in a freak accident, he lost his arm when he tried to pull an eggshell from a mixer and got caught up in it. Palestinian doctors are the ones who saved him. He eventually graduated from high school, but he never received any therapy for his horrible trauma. At 19, he met Franciscan sisters who helped him. The sisters ran a school for traumatized children. When he arrived at the classroom, one little girl hid under the table. He went under the table and talked with her for a while, and he made a new friend. After that, he realized he had a gift for dealing with traumatized children, and he dedicated his life to that cause.

When he went to Italy, he met someone from UW medical school. They brought him back to the US and sponsored him at the UW. For Father Sundborg, Khaled reminded him of the face of Jesus. Khaled applied himself and earned a masters in not-for-profit leadership. His biggest achievement was founding the Gabriel Foundation for trauma treatment. He felt this was an appropriate name, because the angel Gabriel is prominently mentioned in the scriptures of Islam, Judaism, and Christianity.

The second student, Anthony, came to him through business owners. Anthony had an intense desire for education. The owners found him on the streets, broke and with an alcohol problem. Father Sundborg turned to Jim Sinegal, the CEO of Costco. Jim agreed to sponsor Anthony for just one quarter at a time.

Anthony had a tough life. He was one of 13 children. His mother was one of seven wives, so he had a total of 50 brothers and sisters in the Sudan.

Anthony was taken as a child and forced to be a soldier for 16 years. After all that time, he slipped across the border, and attended a high school in Cameroon, then went to the Congo. After unrest erupted there, he was forced to leave. Because he qualified as a refugee in the US, he ended up in South Dakota in a series of blue-collar jobs. After that, he came to Seattle to go to Alaska to make money faster to send home. When he returned from a very profitable Alaska trip, he spent all his money and ended up drunk and on the street. It took just 15 days to waste everything he had earned. Feeling hopeless, he jumped off a bridge to attempt suicide. The large scar he now carries on his face was from that jump. He was 41 when he landed there. Now, within a quarter of finishing his degree at SU, he decided he needed to go back to Sudan and see the mother he had not seen in 28 years. Friends helped with part of the trip’s cost; Costco agreed to pay the rest if he would come back to Costco after and work to pay off one third of the funds they spent on his trip.

When he arrived in country, his gift to his mother was a cow. His villagers were so excited at his arrival that they slaughtered a bull in his honor. One day, ten days before he returned, he was paying the donkey man for bringing water, and the donkey man was shot. The rebels shot 270 that day. Anthony saved the family by bringing them to the open, then assisting them in their escape. Haunted by the Sudan episode, came back finished the degree.

To Father Sundborg, Anthony represents the face of Africa and of homelessness and alcohol abuse in America.

The third student was Oswaldo. Oswaldo came to from him from Bellevue. He was undocumented, and had arrived here at age 11. As a student at Bellevue High, he began an organization to help his Latino friends to improve their graduation rates. With the help of the school district, he was linked to 32 other Latino kids. He met with them for the senior year, helping to write letters to parents requesting their support. As a result of his efforts, 27 of the 32 graduated and went on to college. His ultimate goal is to continue to serve, and to eventually become the mayor of either Bellevue or Seattle.

Father Steve Sundborg’s inspirational speech not only put a face on world issues, but for the BBRC, it put a face on Seattle University, clearly demonstrating SU’s strong values and commitment to the success of its students.

To carry the theme of Presidents Day, past presidents Jenny Andrews and Chuck Kimbrough served as greeters. After Chuck’s stirring invocation, Jenny asked each of our visiting Rotarians, “Who was your favorite President?” The prevailing theme was Washington, Jefferson, and Lincoln – three of the four appearing on Mount Rushmore. The fourth? Well, since Jenny didn’t ask, and since you may have forgotten, it was Teddy Roosevelt. Was he one of the four greatest? Well, he was the only President to receive the Medal of Honor.

Larry May introduced BBRC Student of the Month from Bellevue Christian, Sarah Tandon. Sarah was accompanied by her mother, Birage Tandon, her counselor, Daniel Lopez, and her principal, Sue Tamaling.

Sarah has distinguished herself in academics, in school activities, and through her tireless community service. Academically, she has achieved a perfect 4.0 grade point average, even while taking challenging advanced placement courses. In school activities, she played JV volleyball, played in the pep band, and participated in drama. In community service, her involvement spanned everything from local World Vision projects to a mission to Kenya. Her ambition was to visit all of the world’s continents before she turned 18, and it sounds like she made it. She is looking into several top colleges for next year, and her life plan is to choose a career where she can continue to serve others.

In an effort led by past president Chuck Kimbrough, the BBRC invited back all of our past presidents and former members to receive special recognition on Presidents Day. Former members Dean Pollock and Ted Ederer came back, and it was wonderful to see them.

Most of our past presidents made it back, too. Sergeant-At-Arms Wendy Fischer called them up to the front to participate in a presidential trivia contest (see picture of a number of puzzled presidents with the “deer in the headlights” look trying to solve the trivia problem). Avid reader Steve Goldfarb beat them by five of eleven questions correct, duly impressing the masses.

Rourke O’Brien introduced a novel concept for the club: the “Rotary Ambassador.” This title is reserved for members who have been in the club for a minimum of 15 years, and who have had a change of lifestyle that would make normal membership participation a challenge (moved away, took different jobs, etc.). For these Rotary Ambassadors, there will be reduced dues and no attendance requirements, but with the requirement that they at least remain Paul Harris sustaining members. Half a dozen members already have selected this option, so it looks like it will have a very strong response from those who are eligible. Please see Rourke for more details if you are interested.

Auctioneer Tim Leahy provided the members with a brief slide show outlining our progress on the Bellevue 10K. During his brief pitch, he introduced our growing list of sponsors, as well as the new fundraising teams and their captains. Tim emphasized that every BBRC member has a responsibility to help. More info is available on the website.

Aisha Kabani introduced a local junior in high school who will be spending time overseas soon as a Rotary Exchange Student. She will be one of seven this year from District 5030. Due to privacy rules, we’re no longer able to post the name, personal information, or pictures of such exchange students, but it’s important for the whole club needs to remain aware of the good we are doing by helping in this important area of Rotary involvement.

Chris Monger announced that the BBRC Annual Retreat is being moved this year to coincide with the District Conference. The purpose is to demonstrate our total support for Governor-elect Steve Lingenbrink at that conference. Everyone should make a big effort to attend. Like in all previous years, our retreat will provide us a forum to set the direction for the club for this and following years.

Our Scribe for this week is Tom Smith.  Photos are by Tom and Norm Johnson.

Chuck Kimbrough and John Martinka met with Jeff Mason and the Interact Club at Newport High School on Thursday.  John and Jeff and several of the students are now in Antigua setting up Computers.

“If you walk with Jesus he’s gonna save your soul; you gotta keep the devil way down in the hole.”