Economic Liberty: Past, Present and Future! 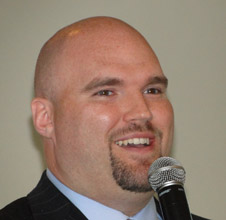 Jenny Andrews introduced speaker, Dave Roland, Director of the Theodore Stiles Center at the Freedom Foundation.  Economic liberty involves the right to use one’s knowledge skills and resources as one sees fit. This includes the right to earn a living in a common or harmless profession. This right has been recognized since the English courts of the sixteenth century.  Lenny Lutes mentioned that golf sponsorships are progressing but we definitely need more. Ann Norman introduced Gabi, our outbound exchange student who just returned from a year in France.

Jenny Andrews introduced speaker, Dave Roland, Director of the Theodore Stiles Center at the Freedom Foundation. Dave has a law degree and a Master’s degree in Theology from Vanderbilt University. He spent two years working in Washington DC for the Institute for Justice before heading to Missouri where he worked for the Show Me Institute and the Freedom Center of Missouri which Dave founded.

Economic liberty involves the right to use one’s knowledge skills and resources as one sees fit. This includes the right to earn a living in a common or harmless profession. This right has been recognized since the English courts of the sixteenth century

120 years ago, only 3 percent of the people were required to obtain the government’s permission before they can earn a living using their profession.

There are three levels of government intervention:

Registration which requires workers to notify the government that they intend to practice a given profession;

Certification in which the government grants special recognition for those meeting standards for training but does not prevent non-certified people from working;

Licensure which prohibits any person from working who has not first gained government approval and is frequently backed by criminal penalties.

Licensing of professions can be both good and bad but in many cases, licensure hurts the very people it is meant to help. Licensing makes services more expensive for people who provide the services as well as the people requiring the services.

Governments make the point that licenses are needed to expose bad actors but the facts are that mechanisms already exist to hold bad actors accountable and the regulatory boards are often dominated by people in the industry who have more of an interest in protecting themselves from competition than in protecting consumers. In addition, the regulatory boards are hostile to innovation and change so they ultimately hold the industry back.

Dave told the story of a man who built innovative, cost-effective homes for people made of recycled tires, bottles, etc. The homes are well-built and eco-friendly but he was prohibited from building these homes in his home state of New Mexico. He built them in Indonesia after the tsunami and in New Orleans after the hurricane and the homes were very well received. The regulatory boards in New Mexico still prohibits him to build homes despite the outstanding results.

Dave showed a video focusing on the licensing requirements for Jerry Schmidt, a tooth floater who is under attack from the government for the work he does. The group was enthralled, especially with the narration.

Steve Lingenbrink’s father passed away this week so please send your condolences.

Roger Allington, who is fighting a recurrence of cancer, last week broke his leg and was admitted to Virginia Mason Hospital. While he was there, his wife Reva passed away. Roger remains in intensive care at Virginia Mason. Please send Roger a card:

Lenny Lutes mentioned that golf sponsorships are progressing but we definitely need more. He encouraged the club to identify people who might be interested in sponsoring the tournament and talk with them ASAP.

Ann Norman introduced Gabi, our outbound exchange student who just returned from a year in France. She shared slides of her journey which was an incredible experience of growth. She made wonderful friends and developed a deep and lifelong relationship with her host family. She spent one week in London with a friend she made while in France and her host family took her to Corsica .

Ann reminded the club that the exchange program affects the lives of many more people than just the person traveling. She encouraged all of us to get involved with the program and Scott reminded us that all the work we do through the golf tournament and Bellevue 10K helps support programs such as this.

Paul Chapman, who craves attention himself, fined Brad Bauman for a tremendously large advertisement for his bank in which he was prominently featured. He then extracted an additional $10 from Rick Klobucher who was rated one of the best attorneys in Seattle

He proceeded with a fantastic quiz featuring our exchange student, Gabi, in which we learned many wonderful trivia points. All was well until Question 7 which was written in Chinese. Bottom line is he extracted a great deal of money while everyone was laughing.

ThoUght for the Week

James Dent – a perfect summer day is when the sun is shining, the sky is blue, the birds are singing . . . . and the lawnmower is broken.

Mr. Roland's role consists of legal research and writing, communication with and in the media statewide, cooperation with like-minded organizations in the state of Washington and across the nation, and acting as an informational resource for private citizens and lawmakers alike on issues of constitutional law and individual liberty. His experience and expertise is in state and federal constitutional law, particularly as it pertains to religious liberties, free speech, property rights (eminent domain), economic liberties and school choice.