Executive Director Congregations for the Homeless 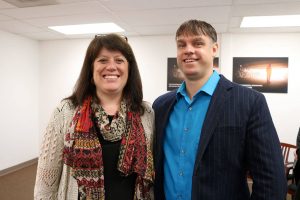 The folks at Congregations for the Homeless (CFH) are getting ready to submit a permit for the new permanent men’s shelter in Bellevue. That’s the project Steve Roberts of BBRC spent the last four years getting rolling. David Bowling, Executive Director of CFH, would like to bring BBRC up to date on their plans.

“In January, Congregations for the Homeless (CFH) announced the final location of its permanent, year-round homeless shelter. David Bowling said they reviewed more than a dozen sites to ensure the shelter works not just for CFH and the population they serve, but for the neighboring communities as well.

At a press conference on January 10, 2019 held at The Eastside Men’s Shelter at Lincoln Center in Bellevue, Congregations for the Homeless (CFH) executive director David Bowling announced that after a robust site assessment process they have chosen a location. The proposed location is a piece of surplus King County property located at 13620 SE Eastgate Way, Bellevue. The goal is to have the facility up and running by 2022.”*

King County Councilmember Claudia Balducci has also been instrumental in this approval process and will introduce David.

David Bowling is the Executive Director of Congregations for the Homeless. He is a graduate of the University of Washington, with a Bachelor degree in Psychology, and the Seattle School of Theology and Psychology with a Masters of Counseling Psychology.