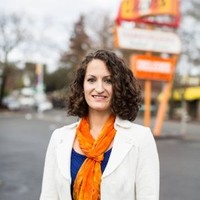 Jasmine Donovan, President and CFO of Dick’s Drive-In Hamburgers, discussed the iconic local hamburger restaurants started by her grandfather and long-time Rotarian, Dick Spady. Dick’s Drive In Restaurants has been serving Seattle customers since 1954. Prior to joining the family business, Jasmine was an officer in the Navy. Actually that is somewhat inaccurate as Jasmine worked for Dick’s as a teenager and college student before enlisting in the Navy.

Dick Spady, with a partner, opened Dick’s initial location on 45th Ave NE, just west of the University of Washington. Dick grew up in Portland and was drafted for World War II. He had a choice of the Army or Navy and chose the Navy. After the war, he attended Oregon State University thanks to the GI Bill. While at OSU, he joined Air Force ROTC and when the Korean War started, he was an officer and sent to Japan to run a commissary.

After the war, Dick was working for a commercial real estate company in Portland when he visited a diner that served hamburgers (a lot of them). That gave him the idea to start Dick’s. He also visited McDonald’s in California as they were the leader in the industry and as it turned out, his commissary experience was a great fit! Feeling Portland was not the right market, he moved to Seattle and with a partner started Dick’s!

Dick was an early entrepreneur and always believed “Tell people what you want and you may get it!” A contractor was willing to build the 45th Street restaurant on an IOU as Dick and his partner lacked the finances to build it themselves. A year later, they opened the Capital Hill location and later Holman Road and Lake City Way locations. At the time, they had a Bellevue location but a major competitor, Herfy’s, built right across the street. Dick’s sold the Bellevue location and moved to lower Queen Anne.

No additional growth occurred until 2011 when they opened their Edmonds location on Highway 99. On November 12, 2018 they opened their new Kent location to the delight of hamburger lovers in the south-end! Jasmine then showed a movie of that opening, which had a large, hungry and grateful crowd! She also hinted a Dick’s location would be coming to the Eastside in the not too distant future (no specifics)!

Sadly Dick Spady passed away on January 10, 2016 at the age of 93 but Dick’s Drive-In Hamburgers continues to please customers in the Greater Seattle area under the capable leadership of Jasmine Donovan and her team.

Jasmine Donovan is the President and CFO of Dick’s Drive-In Restaurants. Granddaughter of one of the founders and namesake, Dick Spady, she has worked at the business several times since she was 16 years old and started working full-time on the executive team in 2013. Jasmine stepped into the role of President when her father, Jim Spady, retired in late March 2019. Jasmine is on the board of the Seattle Metropolitan Chamber of Commerce, Mary’s Place, and the Forum Foundation.
Jasmine graduated from Hillsdale College with a Bachelor’s degree in Mathematics and Chemistry in 2006. She joined the Navy after college and was assigned as an instructor at the Naval Nuclear Power Training Command in Charleston, SC. During her service she was the Command Public Affairs Officer, earned her master training specialist certification, and was the Division Director of the enlisted physics teaching division. While in Charleston, Jasmine earned her Masters in Business with an emphasis in Finance at Charleston Southern University. Jasmine currently resides in North Seattle with her husband and two sons.