It all began in 1982, when Norm Hillis, a banker and member of the Rotary Club of the University District, urged his follow club members to find a way to help hungry people in the community. Mike Shanahan, a fellow Rotarian and Chief of Police for the University of Washington, used an all points bulletin to encourage law enforcement officials across the state to help locate produce that was going to waste. Within days, Mike received calls from officials reporting tens of thousands of pounds of produce available for pick up. Using his Rotary connections, Mike found donated trucking to pick up the produce and bring it back to the Seattle area for distribution. Harvest Against Hunger (formerly Rotary First Harvest) was born.

Since that fateful day in 1982, Harvest Against Hunger has become a significant Rotary District 5030 program, which the Bellevue Breakfast Rotary Club (BBRC) has wholeheartedly embraced. Today, Harvest Against Hunger plays a unique role in the hunger relief system by connecting farmers, transportation providers, produce packers, volunteers and food banks to people experiencing hunger.

Every second Saturday of the month (pre COVID-19), volunteers from BBRC get together at the Northwest Harvest warehouse in Kent to box apples or pears; bag peas, corn, oats, pasta, rice or beans; and swap stories with members of other Rotary clubs in District 5030.

Why do we enthusiastically get up early on a Saturday morning to join a Harvest Against Hunger work party? Because the following stats on our fellow citizens in Washington are sobering and we want to help them: 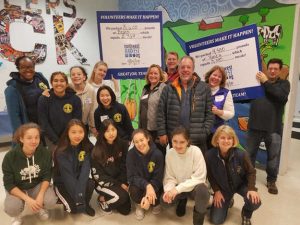 In addition to BBRC members, we’ve also inspired members of the Forest Ridge Interact Club we sponsor to join us on Saturday mornings. We encourage these young leaders to live by Rotary’s philosophy of Service Above Self.

For the last several years, the BBRC has proudly received Harvest Against Hunger’s Golden Donut Award because we have provided the most work party volunteers per year than any other Rotary Club in District 5030 on a per capita basis. Today, three of our members serve on Harvest Against Hunger’s Board of Directors: Wendi Fischer, Morris Kremen and Adam Mihlstin.

The BBRC is serious about hunger relief. Because of us, many will not have to choose between paying rent or putting food on the table.