The numbers tell the story: 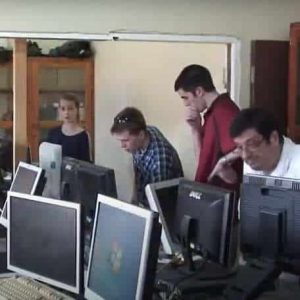 In 2003 we were visiting relatives in Slovakia, I arranged to meet with the Rotary Club of Zilina, and they were open to doing a project together, didn’t have any project ideas, and made it clear it had to involve youth. The next day my cousin told me he needed a computer for his (first grade) son’s school. I asked if it was for the classroom, he said no, for the school. Boom! I knew about Computers for the World, a Rotary District 5030, and that computers in schools would make a great project.

BBRC member Howard Johnson was a school district deputy superintendent and he introduced me to the right people including Newport High School technology teacher and department head, Jeff Mason. Jeff had been thinking of a project to do and this was it. In the summer of 2004, we submitted a grant application to The Rotary Foundation (TRF) and after a couple months it was approved.

We thought we were pretty cool shipping about 125 computers, CRT monitors, and networking gear to Slovakia. And it was cool. We helped a lot of students over the two years we went there. We also helped a lot of Bellevue students. Every trip has had 10-15 of Jeff’s students travel, do the hands-on work, be hosted by local families, and have their lives changed.

To shorten the story, our plan was to go to different places every two years. So, in 2007 we went to Turkey, after an introduction from a friend. Talk about a bureaucratic disaster. We and the local Rotarians decided it wasn’t worth doing again. About the same time BBRC member Steve Lingenbrink went to Antigua, went to a Rotary meeting, met Rotary Club of Antigua member Cordel Josiah, and was told they badly needed technology for their schools.

In April 2008 we went to Antigua, West Indies, former British colony and now part of the Commonwealth. We installed and networked about 300 computers in private schools. Private schools only because the government didn’t welcome us with open arms, so no public schools. Going back to Antigua became a regular thing given TRF’s emphasis on going narrow and deep. We’re glad we make this an annual trip because as our relationships strengthened, we were accepted as true partners, and have been able to get more done.

The public-school teachers started asking why their schools weren’t getting computers, so we went to public primary schools in 2009. That year we also started what turned into a fantastic side project, distributing 1,500 illustrated dictionaries to all the third-grade students in the country. We also shipped four industrial grade sewing machines for a community center (more on this upcoming).

It was in 2009 we started great relationships with the Ballantine Family Fund and the Mill Reef Fund, the charitable arm of the Mill Reef Club, which is located in the southeast quadrant of the island. They have been great partners, we leverage their money with our Rotary grants, and we all help the people of Antigua.

In 2012 we shipped regular sewing machines, fabric, and supplies and started a sewing training program in our original location, led by my wife Jan. This proved so popular that we did another seven sewing centers over the next eight years.

2015: Shock! Our grant application was rejected. TRF’s new rules mandated an emphasis on “training and sustainability.” This meant we, and every other Rotary Club, can’t just donate “stuff.” Scramble time. We contacted the Antigua Ministry of Education, they provided us with a fantastic, independent trainer, Ms. Mako Williams, and our revised application was approved.

However, along with training and sustainability comes accountability, and this was a sticking point with the government. It took two years to figure out responsibilities and move forward, slowly. We experienced the same issue in 2017 and it took two more years and a self-funded (no grant from TRF) to get back on track for our most successful project to date.

Our February 2020 trip saw us bring 500 computers, train over 80 teachers, install dozens of Wi-Fi networks, kickoff a new sewing center, and build the best relationships we’ve ever had with Antigua government officials. We have a lot of plans for the future, have worked closely with TRF, the Antiguan government, and the Rotary Club of Antigua. Our only variable as of mid-2020 is the effect of COVID on Antigua and its tourist-based economy. We will go back, we just don’t know when or exactly what the next phase will look like.