Let it be said in years to come, that the Rotary global campaign to eradicate malaria started right here at the Bellevue Breakfast Club.

They said it couldn't be done.  They said that a diverse club of nearly 100 people could not all get behind a single cause in less than a month.

It took only 18 days, 3 hours and 42 minutes for all 96 members and ambassadors to pledge.

Here is how the participation rates turned out in the end:

Through John Martinka, on hearing of the campaign the World Service Committee, immediately agreed to match $750.  Paul Chapman floated the idea of a club match, and at the March Board meeting, the club agreed to match the remaining $2,750

The President of the RMP Larry Granat, and Board member Corrine Cavanaugh, presenting the banner to the club to mark the first club in the world to join the advocacy campaign with 100% participation.  Along with the impressive turnout, money also followed.  The club presented a check to Larry for $7,000 - which was $3,500 raised from the campaign itself, which was matched by $3,500 from the club. 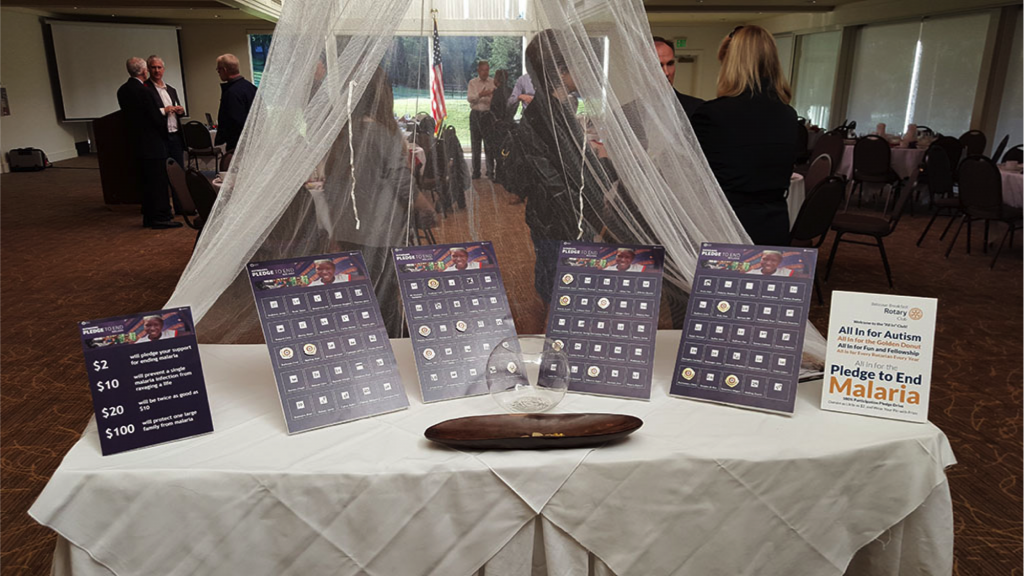 What does the RMP Do?

Act as catalyst and advocate to Rotary Clubs, Districts and RI to make malaria ‘the next polio’ for a new generation

Has it been your dream to send Girish packing!? Well, now is your chance! Join us on Saturday, June 26th at 6:00PM for Rotating the Wheels 2021, where we'll bid farewell to Girish and welcome Colleen. The event is free,…

It’s a common comment from Jubilee REACH volunteers that BBRC shoppers who drop off donated items on Wednesday mornings seem very happy. Did you know that doing good for others increases life-expectancy? Yes, it’s true! There’s a link between giving,…