Congratulations to our Student of the Month - Ryo Karr 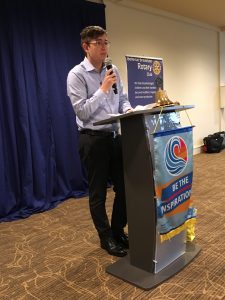 Ryo Karr our Student of the Month

Ryo Karr was named our student of the month and he attends Eastside Preparatory School.  Ryo has maintained a high GPA and is actively involved with his school’s theater production, as an actor and director of the shows.  He is looking to pursue a career in film and theater industry, where he ultimately hopes to direct his own movies one day.  We wish him tremendous success in the pursuit of his thespian ambitions and look forward to the day, when his name appears in lights or on the big screen!

Student of the Month - Alex Chee 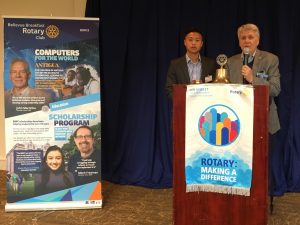 Larry May introducing our Student of the Month, Alex Chee from Bellevue Christian

Alex goes to school at Bellevue Christian, and he was truly complementary of the education and support he has received from the school.  Alex’s parents were in the audience supporting him this morning.  His interests lie in supporting international projects that are aligned in service with his church and he enjoys athletic sports.  This combination of service, pursuit in sports and education have given him a sense of perseverance in getting things done.  He is looking to study Mechanical Engineering at UW, following in his father footsteps and, just like his father, he hopes to work for Boeing one day in a role where he can have an impact on the world.  We wish Alex success in his pursuit of his dreams.

Student of the Month - Casey Kuloloia 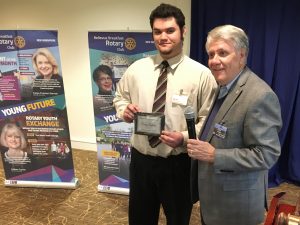 Casey Kuloloia is our Student of the Month and Eastside Academy’s Student of the Year.  Casey joined Eastside Academy, after he sustained injuries as a high-level athlete that made it difficult for him to continue in a large school environment.  It was clear that Casey was a leader as soon as he joined the Academy.  Other students quickly looked up to him thanks to his positive attitude and compassion for those around him.  He also has a brilliant sense of humor, which he balances with a sincerity that is beyond his years.  Casey is an industrious individual, both in the school, where he has grown academically, and outside where he holds down jobs to support himself.  Yet, it is Casey’s love for his family (who were with him this morning) that is combined with a tremendous respect for them that stands out to those who know him.  Casey’s plans for the future will be to pursue a career in real estate and music, which we wish him future success in.

Student of the Month - Huy Nguyen 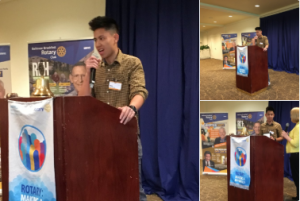 Huy Nguyen – Student of the Month

Tanya Franzen-Garrett introduced our Student of the Month, who was Huy Nguyen from Sammamish High School.  Huy addressed our club, where we learned that his family originated from Vietnam and that he was first member of his family who will be attending UW Bothell to study Computer Science.  In terms of service, Huy volunteers his time with World Vision, where he works within their warehouse to pack teacher supplies that are used in the local schools.  We wish Huy tremendous success in his ongoing journey.

Student of the Month for February

Congratulations to Eliza Marie Escarez from Sammamish High School for being selected as our Student of the Month for February. Our Rotary members were thrilled to learn about Eliza’s desire to pursue a career in software engineering and her involvement in robotics.

Student of the month- Tiana Grahm